South Africa acknowledged its role as a major contributor to greenhouse gas emissions on the continent, Water and Environmental Affairs Minister Edna Molewa said as the African agenda was set at COP 17 in Durban on Monday.

The all-important 17th Conference of the Parties (COP 17) to the UN Framework Convention on Climate Change (UNFCCC) got under way at Durban’s International Convention Centre on Monday.

“We are responsible for 38 percent of Africa’s total emissions,” said Molewa, who leads South Africa’s negotiating team at COP 17.

“The National Climate Change Response White Paper states our commitment to reduce CO2 emissions by 34 percent … in 2020 and by 40 percent in 2025 before stabilising our emissions in absolute terms and ultimately reducing them.”

Deforestation was another major challenge, Molewa said, with the Food and Agriculture Organisation (FAO) placing six out of the 10 largest forest losses in the world in sub-Saharan Africa. This was largely due to forest areas being converted for relatively low-income usage.

“A programme of incentives to avoid deforestation in Africa could make great inroads into mitigating CO2 emissions, at the same time supporting greener alternatives,” Molewa said.

Although Africa has contributed the least to the build-up of greenhouse gases globally, it will bear the brunt of the adverse effects of climate change because the continent is already highly dependent on climate-sensitive sectors such as rain-fed agriculture.

It is said that the average African generates about 13 times less greenhouse gases than someone in North America.

In the absence of an overriding mitigation and adaptation agenda, this figure is set to rise in coming years, as development and population rates grow.

However, opportunities for economic development were vast, and Africa therefore needed to embark on a path of sustainable development with new, clean, appropriate technologies and to build climate-resilient communities, Molewa said.

There are around 550-million people in Africa that do not have access to electricity, putting the continent in a position to become a world leader in the deployment of renewable energy sources.

“Hydropower, for instance, is an under-utilised energy source, with less than 10 percent of the hydropower potential in Africa being utilised currently,” Molewa said.

“A national, regional and international effort towards unlocking this potential is an example of how African societies could go from being amongst the most vulnerable to becoming climate-resilient.”

“Because of Africa’s vulnerability to climate change, failure to contain average global temperature increases to within 2 degrees would be an unacceptable outcome for the global mitigation effort,” Molewa said.

“The impacts of climate change know no borders, and have been a driving force for cooperation between African governments,” she added, noting that the Commission of the African Union had begun work on an African Strategy on Climate Change. 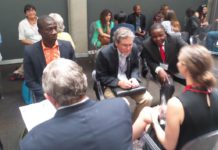 Ways of giving on the agenda