A South African engineer who works at the Department of Water Affairs and Forestry has scooped an international award for his contribution to the expansion of technology.

A partially blind Kelvin Legge was bestowed with the award at the General Assembly of the International Geosynthetics Society in Yokohama, Japan, on Thursday.

Legge is the first African to receive this award in the field of civil and environmental engineering.

What drew the international community’s attention was Legge’s design theory in the use of plastic filter materials in earth embankment dams, a critical feature for their safety.

He also invented a solution to improve the performance of contaminant containment barriers such as those found at the bottom of landfills and hazardous waste sites. Legge’s solution also significantly reduces the risk of environmental pollution.

On receiving the award, Legge said it was recognition for the excellent work being done by South Africa’s engineering community.

The International Geosynthetics Society was founded by a group of geotechnical engineers and textile specialists in Paris in 1983.

The society brings together people from around the world who are involved in the design, manufacture, sale or use of plastic materials in civil engineering and associated technologies, or who teach or conduct research on such products.

A maximum of five awards are made at the society’s quadrennial conference.

The achievement is more remarkable given that Legge lost some of his sight in 1992 when he was exposed to a cocktail of toxic waste which had contaminated the soil with which he was working. 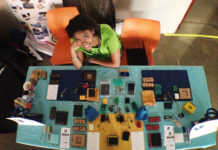