South Africa’s unique value system and outlook, as well as its position as Africa’s strongest economy, will help boost the BRICS grouping, President Jacob Zuma said on the opening day of the BRIC Leaders Summit in Sanya, China on Thursday.

Zuma was speaking at a joint media briefing with the heads of state of Brazil, Russia, India and China, who all pledged to work together to reform global governance organisations and improve trade and co-operation among the BRICS countries and other developing nations.

Zuma, who said it was a “great honour” for South Africa to attend the summit, pointed out that although its partners in BRICS were among the leading economies of the world, South Africa had “unique attributes” which would help boost the grouping.

“At a political level, our partners appreciate our unique value system which derives from our history and a particular experience,” Zuma said.

As a major player in Africa’s financial markets, minerals, industrial and services sectors, and infrastructure development and electricity generation, South Africa had much to offer.

“As you may be aware, our BRICS partners are now the largest trading partners of both Africa and South Africa,” Zuma said, adding that the four countries fully realised the exponential growth potential of the regional market.

He added that there would be further opportunities, with the setting up in a few months’ time of a Free Trade Agreement between the Southern African Customs Union (Sacu), the Common Market of East and Southern Africa (Comesa) and the East African Community.

“It is just natural that our partners will look at South Africa as a springboard into the region and for us to provide guidance on economic development opportunities,” Zuma said.

Critical for enhanced co-operation, he said, was that the five BRICS members all served on the UN Security Council, either as non-permanent members (Brazil, India and South Africa) or permanent members (China and Russia).

BRICS members would also continue to collaborate through the UN, G20 and the India, Brazil South Africa (IBSA) forum, Zuma said, while the non-aligned movement and Group of 77 would also remain important in furthering South-South relations.

There was also a need to reform the UN Security Council in order to make it more effective, and the major global financial institutions in order to promote a “just economic world order”.

Zuma said South Africa, as hosts of the upcoming 17th Conference of the Parties to the UN Framework Convention on Climate Change (COP17), also wanted to ensure a legally binding global climate-change agreement.

South Africa looked forward to co-operating with its BRICS partners to deepen co-operation, but most importantly to ensure a more equitable world, Zuma said.

BRICS ‘not an opposition grouping’

Zuma also briefed the other BRICS leaders on the African Union’s (AU’s) peace and security programmes in Africa, including its roadmap for Libya, which he said was designed to help Libyans achieve a “lasting peace”.

He said Russia was “deeply concerned” about the conflict in Libya, particularly with the safety of country’s citizens, and pointed out that Russia was not in favour of the use of force over that of dialogue to resolve the conflict in the north African country.

Indian Prime Minister Manmohan Singh said he and his fellow BRICS leaders had “greatly benefited from President Zuma’s counselling”, while Brazil’s President Dilma Rousseff said she was happy to see the attendance of Zuma, which would bring in valuable experience from Africa.

Rousseff, who congratulated South Africa for being awarded the hosting of the COP17 climate conference taking place in Durban this year, said the BRICS countries shared similar views on economic growth and income distribution.

She cautioned that the BRICS grouping was not an organisation set up in opposition to any group of country, but that it worked with other institutions like the IMF.

Chinese President Hu Jintao said the BRICS would continue to promote “strong and balanced growth of the world economy”.

He said the BRICS would look to improve relations, especially in areas such as business and science and technology, and to set up think-tanks of BRICS members. 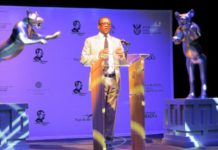