Black-owned businesses are set for another boost following a pledge by South African Airways (SAA) to support black industrialists, including women and youth, when procuring goods and services in the future. It is the first initiative of its kind in the South African aviation industry.

Dudu Myeni, the chairperson of the SAA board, made the announcement at a gathering of over 200 entrepreneurs in Midrand, on Friday, 12 June. Attendees included small, medium and micro enterprises that are 50% or more black-owned, black women-owned, disabled and youth-owned.

The gathering followed last month’s signing of a memorandum of understanding between SAA and the Department of Trade and Industry that ensured commitment to develop and support black-owned businesses.

Myeni said the meeting was a step away from talking about supporting black business to finally acting upon the idea. “There has always been a lot of talk- shopping and not enough doing. Now is the time for inclusive participation. Now is the time for organic development and support for business.”

She added that SAA’s procurement arm had a large enough capacity to incubate a group of black industrialists. “As SAA, we are committed to empowering entrepreneurs from disadvantaged backgrounds by levelling the playing field to deliver inclusive opportunities.”

SAA was taking seriously its leadership role in developing business within the aviation industry. Myeni quoted a study by economic forecaster Oxford Economics that the SAA Group contributed R9.2-billion to the South African gross domestic product, of which R1.6-billion was contributed through spending by employees and the company’s supply chain. It found that 16 400 jobs were created directly through SAA’s supply chain.

Friday’s event was the first in a series of suppliers’ engagement summits that SAA will be hosting. At the gatherings, small, medium and micro enterprises will have the opportunity to engage with SAA group buyers, as well as network with other black-owned businesses. An overview of SAA’s Procurement Transformation mission and the SAA Annual Procurement Plan 2015 will also be given.

SAA said the engagements would be held in major cities around the country, including in Cape Town, Durban and Port Elizabeth. 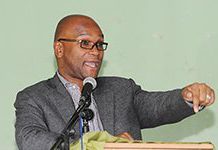