A City of Johannesburg business initiative, Jozi: My Beginning, announced the final 17 ventures selected from over 2 000 entrants to receive a financial helping hand from the city. It will allow them to grow and compete in the marketplace, while creating jobs and boosting the economy.

The initiative forms part of the Jozi@Work program that is setting aside R50-million to fund local talent with innovative business ideas that can benefit the public and enrich the lives of local residents.

Announcing the results on 20 April 2016, Johannesburg mayor Mpho Parks Tau congratulated the 17 businesses selected to develop its ideas further, adding how vital it was for the businesses to provide local solutions to local problems, saying it should not always be on the shoulders of the municipality.

Two of the finalists have developed unique ideas that show promise for servicing the community. One addresses the challenges of shack fire prevention and the other tries to solve the issue of rubbish collection and recycling.

Jonathan Frost and Peter Barthel spent years developing a viable solution to the problem of shack fires in and around the city.

Through trial and error tests, the pair came up with a safe chemical applicant that can be used to curb the spread of fires in any home.

“[The concept is] a fire-proofing material that you can apply onto any structure for example glass [or] metal surfaces for your informal settlements. We want to prevent the spread of fire from the source hence securing the rest of the dwellings surrounding them so that they don’t get damaged,” Frost told news website, News24.

According to Frost, the applicant can be applied to the inside of an informal home made up of timber frames and metal parts.

“The chemicals will reduce the burn properties of wood and wood products and will give shack dwellers a chance to either douse the fire or vacate the shack in time. It will also prevent spreading of fires to adjacent shacks,” Frost said.

The chemical solution is easy to apply and can be done as one would apply plaster on a wall, he said. There would be initial training involved with individuals in the community interested in using the product, and they would then get an opportunity to start their own business in their respective communities, selling the product to the residents.

The product is currently undergoing various health and safety tests, but the outcome for the idea looks positive. Considering the product’s selection for Jozi: My Beginning, Frost said “we’re very privileged to have been chosen. I’m looking forward to developing the product fully”.

A fresh take on trash collection

Sifiso is using media as a catalyst for social change. His project, #abomakgereza recently did a clean-up of Jozi! pic.twitter.com/sZglZR8t3V

Abomakgereza, a recycling idea with a difference, has been developed by Soweto entrepreneur Sifiso Ngobese, who looked at improving safety of “recycling riders” – those who sift through rubbish to collect and sell recyclables. “The biggest problem that the [riders] face on a regular basis is that the trolleys they use break down easily and have poor visibility at night,” Ngobese said about the genesis of the idea.

Ngobese and his team designed and built a safer, roadworthy and more functional trolley that riders could use to collect, as well generate some extra income. To finance the manufacturing, Ngobese sold advertising space on the trolleys, “it doubles up as a mobile billboard where companies can advertise their brand and add content on the trolley,” he explained, adding that 10% of all business profits for the companies generated from the advertising will be distributed to the trolley riders, in the form of food, financial support and anything else the recyclers may need.

The company is beginning to create a database of registered, vetted riders that could be accessed by both potential advertisers as well as the municipality. The system can track the identities and number of riders operating in a specific area, as well as the amount of recycling items the trolleys pick up.

The project currently has 40 recycling riders registered on its database. With the help of the Jozi: My Beginning initiative, Ngobese would like to increase that number to 100.

Those who will be at the 702 walk the talk looking out for #Abomakgereza with branded trolleys cleaning up the venue. pic.twitter.com/UwzNmQLgK5
— Abomakgereza (@ngobese_sifiso) July 24, 2015

The idea has also developed into waste management services for special events, such as the 702 Walk The Talk race in 2015 which saw recyclers using their trolleys to tidy up after the event.

Ngobese hopes the Abomakgereza business concept, now with backing from the City of Johannesburg, can branch out into full time waste management as a supplementary service with larger waste pick up companies to serve more areas of the community. 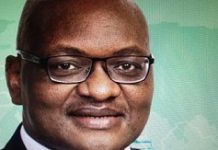 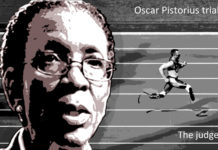 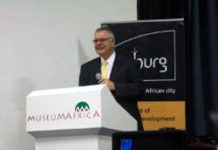