Chinese firm Shanghai Zendai has planned to develop the 1,600 hectares of land into the “New York of Africa”.

Work on the first set of 300 residential units and some of the roads was already under way, the newspaper said.

Chinese firm Shanghai Zendai planned to develop the 1,600 hectares of land into the “New York of Africa”, Dai Zhikang, the company’s founder and chairman, said at a press conference in November 2013.

The area will be developed into a financial hub, with as many as 35 000 houses, an educational centre, a hospital and medical centre, and a sport stadium.

Zendai South Africa chief operating officer Du Wenhui told The Star that the development was a 15- to 20-year project that would see between 30 000 and 50 000 housing units of different types and sizes being built, ultimately housing about 100 000 residents.

Wenhui said the project had been met with some scepticism, especially after drawings were released showing what it would look like in 20 years time.

But “hope and imagination” were key words, he said. “The project will be market driven, and depending on what our clients or developers want, the sky is the limit,” he was quoted as saying.

It bought the 1,600-hectare property from South Africa’s chemicals and explosives company AECI in November 2013 for R1.06-billion, Business Day reported at the time. The sale was part of AECI’s plans to dispose of surplus land holdings, and the transaction represents one of the largest single foreign direct investments in South Africa.

“It will become the future capital of the whole of Africa,” Dai reportedly said at a press conference in November 2013. “This will be on par with cities like New York in America or Hong Kong in the Far East.”

The development, which is yet to be named, will become a hub for Chinese firms investing in sub-Saharan Africa, Dai said.

The Modderfontein site is located between the central business district of Sandton and OR Tambo International Airport.

It is on the Gautrain route, and the development will also include the completion of the Modderfontein station.

Nino Zama of the Gauteng Provincial Government said there was possibility for collaboration with local contractors. 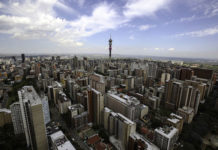