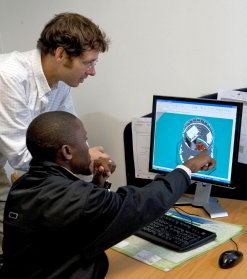 Cape Town is recognised worldwide as a
hub of technology, and is the breeding
ground for more IT success stories than
anywhere else in Africa.

In recent years, Cape Town has positioned itself as a hub of innovation and technology through IT initiatives such as the Silicon Cape Foundation, the Bandwidth Barn business incubator, and partnerships with global technology giants such as Google.

So promising is the city’s innovative inclination that it was named, for the second time, as one of the world’s up-and-coming innovators. It made the cut for 2ThinkNow’s 2010 list of places in developing nations which rank among the most progressive in the world.

Cape Town ranked third on the emerging cities list, which is one of a set issued by Melbourne-based 2ThinkNow, an agency that measures innovation for cities, businesses and other entities around the world.

The agency keeps tabs on 1 540 cities and ranks them on criteria such as geography, population, health and wealth.

In 2010 these 1 540 monitored cities were narrowed down to a final list of 289, all of which had comprehensive data on 162 indicators across 31 industry and community segments including arts, commerce and finance, food, health and medicine, technology, religion, media, journalism and censorship, and more.

The finalists were then rated by expert analysts and their scores weighted against 21 current global trends, before being graded into five bands – nexus, hub, node, influencer and upstart cities – in descending order of their standing in the global innovation economy.

Cape Town’s third place on the emerging cities index, which covers the regions of Africa, the Middle East and the Caucasus, puts it just behind Abu Dhabi and Dubai, cities both known for their forward thinking.

Cape Town was again listed as a node city – one which shows a broad performance across many segments, although with some imbalance – and is on par with Dubai and Jeddah, the two other node cities on the emerging list, as well as Moscow, Atlanta, Kuala Lumpur, Mumbai, Brisbane and Buenos Aires on other lists.

According to 2ThinkNow, classification as a node city is a good start, as it means that the city is globally competitive. Node and influencer cities have regional industry influence on innovation.

The latest development is the launch in March 2011 of a new technology start-up incubator, driven by global IT giant Google, in Cape Town.

The world’s biggest online corporation has invited tech innovators living in South Africa to join their six-month Umbono programme, a pilot for Google that, if successful, may be implemented in other countries.

The programme will act as a springboard for tech entrepreneurs, turning their computer- or mobile-based ideas into businesses.

Umbono (isiZulu, meaning “vision” or “idea”) will provide successful candidates with between R173 000 (US$25 000) and R346 000 ($50 000) in equity funding, as well as free office space at Hub Cape Town, business training, free bandwidth, mentorship and access to expertise, and networking and marketing events to help the participant grow.

According to Google, the programme is meant to encourage growth within the South African developer community. Google is also trying to make the internet accessible to more people in Africa through this programme.

The chosen teams will benefit from a mentor base comprising local and international experts. Team members must be able to legally live and work in South Africa in order to qualify.

Umbono’s programme manager Johanna Kollar said the mentor base is a key component of the initiative. Experts will provide guidance on topics such as product design, commercialisation, legal incorporation and valuation.

Kollar added that the experts, whom she refers to as Googlers, will participate on a volunteer basis.

“Our Googlers from around the world, who are volunteering their time, are passionate about technology in Africa and will be able to help teams with the challenges they face, whether it be on the product, business or technical front,” she said.

The Mother City was chosen as the incubator’s base of operations because it’s fast becoming Africa’s very own Silicon Valley. The city has, in recent years, positioned itself as a hub of innovation and technology thanks to initiatives such as the Silicon Cape Foundation, an IT networking body which is collaborating with Google in running Umbono.

Foundation board member Justin Spratt said the programme gives technology enthusiasts the opportunity they need to learn and grow. “There is a lot of talent and enthusiasm for technology [in Cape Town], and many ideas just need that window of opportunity,” said Spratt.

Bandwidth Barn, a Cape Town-based business incubator, was also brought on board. Along with the Silicon Cape Foundation, Bandwidth Barn is there to provide assistance to the selected teams to ensure they get the most out of their six months.

The city also possesses respected tertiary institutes, namely the University of Cape Town and Stellenbosch University, which have strong IT courses.

For Kollar, Cape Town has the ingredients that make it the perfect environment to run a tech-based company.  She added that at this point in time there are no plans to extend the incubator to other parts of the country.

Referring to local start-ups such as Yola, MXit and Twangoo, Google South Africa’s country manager Luke Mckend said that this dynamic tech scene applied not only to Cape Town, but the entire country.

“Google’s latest investment with Umbono is a great extension of our overall strategy in the region to strengthen the web ecosystem,” said McKend.

The selection committee will comprise angel investors – individuals who typically invest their own money into start-ups – and Google employees, who will then pick the candidates based on various criteria including the business potential of the idea, applicability and suitability to regional and global needs, and ability to bring the idea from concept to execution.

The first round of application ends on 15 April. However, the website will still accept applications past the deadline. Kollar said the application process will remain open year-round as people always have good ideas.

She described the potential successful applicants as passionate about technology and committed to their business idea, explaining that they should be willing to see their idea through to the prototype and, thereafter, use their technical skills to push the product to the next level.

“Beyond that, teams must have the vision to scale their prototype or product to a regional or global business,” she said.

She said that Google aims to choose at least five teams for this year’s programme, but added that this number will depend on quality of the teams and interest from the angel investors, who will receive a 10% share in the business in exchange for their financial contribution.

According to the Google website, the programme prefers teams to apply even though individuals are allowed. However, individuals are discouraged from applying if they do not have a computer programming background, which is one of the criteria.

Applicants are allowed to submit several ideas but are advised to submit one strong idea instead as it will stand a better chance of being successful.

IT success out of the Mother City

The Cape IT Initiative (CITI) was founded in 1998 and is one of the region’s longest-running projects. The development agency aims to strengthen the Cape IT community, attract investment into the country, keep talent in the province, and promote the desirability of the Cape as an area to do IT-related business.

According to CITI, Cape Town has produced the highest number of IT success stories on the entire continent.

The organisation has successfully launched a number of projects, among them the Bandwidth Barn; My Mentor, which provides professional and personal support to promising IT entrepreurs; and Women in ICT, which targets women business owners in the sector and helps them to grow their businesses and build their contact networks.

CITI subsidiary Bandwidth barn has grown from an IT incubator into a fully-fledged business incubator. The company provides assistance to new businesses, helping them overcome barriers to survival and growth through a two-faceted strategy. Firstly, it helps with essential infrastructure and office space, which is rented to the new business on a short-term lease.

Secondly, it puts entrepreneurs through its business development programme, which builds sustainability by providing start-up owners and managers with basic business skills.

A recent report which analyses the success of the Bandwidth Barn’s initiatives since 2006 shows its proven track record – of the 40 companies that have benefited from Bandwidth Barn’s assistance, 33, or an impressive 82.5%, are still in business.

Success stories such as web and mobile application developer New Media Labs, custom software developer ViaData, and computer training company Radical Learning are further proof that the IT sector in the Western Cape is thriving.

The non-profit Silicon Cape is the brainchild of entrepreneurs Justin Stanford and Vinny Lingham, who is better known as the creator of Yola (formerly SynthaSite), a hugely successful online website-building application.

Modelled on the Californian Silicon Valley area, the South African version is located in the Cape, but the founders are quick to emphasise that the rest of the country is by no means excluded. It’s community driven and has ambitions of becoming a known brand that represents some of South Africa’s brightest technical minds, but will also attract foreign investment into the country.

Silicon Valley aims to boost the successful creation and growth of world-class IT start-up businesses, contribute to job creation in South Africa, and to build a perception of this area as a flourishing technology hub.

The Cape IT Initiative (CITI) was founded in 1998 and is one of the region’s longest-running projects. The development agency aims to strengthen the Cape IT community, attract investment into the country, keep talent in the province, and promote the desirability of the Cape as an area to do ICT business.

The organisation has successfully launched a number of projects, among them the The Bandwidth Barn, which has grown from an IT incubator into a fully-fledged business incubator; My Mentor, which provides professional and personal support to promising ICT entrepreurs; and Women in ICT, which targets women ICT business owners and helps them to grow their businesses and build their contact networks.