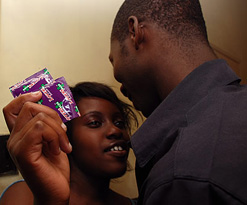 Men in rural Zimbabwe are taking a hands-on approach to pregnancy – and to preventing the transmission of HIV from mother to child.

The Unicef-sponsored Male Champions programme is working to get men involved in their partners’ pregnancies in the rural district of Mberengwa, about 300 kilometres outside Zimbabwe’s capital, Harare. The programme uses HIV-positive male caregivers to mobilise men and their partners to undergo HIV testing and access prevention of mother-to-child transmission (PMTCT).

“When we first started, most men were not willing to get tested, especially when we sent female caregivers,” said Elijah Mumba, a home caregiver who works out of the Musumi Mission hospital, where the programme is based.

“The problem is that because of our socialisation some men may not value advice when it comes from a woman, and that was the reason we decided to use men to talk to other men.”

Pregnant women often discover their HIV status when they use voluntary testing and counselling (VCT) services as part of antenatal care, but are usually afraid that they will be blamed for introducing the virus into the relationship if they disclose a positive diagnosis to their partner.

Fear of stigma, abuse, and rejection by communities and partners were among the main reasons women shunned PMTCT services, according to a recent report, Missing the Target: Failing Women, Failing Children, by the International Treatment Preparedness Coalition, a global lobby group.

Unicef said more than 93% of pregnant women in Zimbabwe attended antenatal clinics, but less than half of those requiring prevention of mother to child transmission services received it. Unicef communications officer Tsitsi Singizi noted that whether a woman accessed PMTCT services might be a man’s decision.

“In most communities men are the decision-makers – they decide on whether to disclose HIV status, and they can chase their wives away after disclosure,” Singizi said.

“Although they do not ultimately feed the baby, men also decide on the feeding practices – it is crucial that they are included and mobilised for the success of any viable PMTCT programme,” she said.

The World Health Organisation recommends that HIV-positive mothers on antiretroviral (ARV) drugs breastfeed their children for up to two months; those not on treatment are encouraged to give their children formula to reduce the chance of HIV transmission. Many women find this difficult because of the stigma attached to bottle feeding, and the cost of formula.

UNAids has estimated Zimbabwe’s national HIV prevalence rate at about 15%, with children below the age of 15 years accounting for about 9% of the 1.3-million people living with HIV.

In 2008 Mernat Hove and his wife, Elizabeth, learned they were both HIV-positive. She was the first to discover her status after being tested at the local antenatal clinic. “I was not sure whether or not to tell my husband, so I kept it a secret for about two months,” Elizabeth said.

“One day, one of the caregivers, Mercy Marimo, came to check on me and I found the courage to tell her.” Marimo volunteered to speak to Elizabeth’s husband and called on her colleague, Elijah Mumba.

When Marimo and Mumba broke the news to Mernat, he stormed out of the house. Elizabeth said, “At first I was angry that she had told my secret to another person, but later on I found out that this was actually to my advantage.”

Mumba followed Mernat out of the house. Hours later they came back. “Mernat was looking less furious, and that’s when he accepted to get tested with me. He also tested HIV-positive, but we have been together since then,” Elizabeth said.

Mernat said Mumba had explained how important testing and PMTCT services were to his baby, and his desire to protect his unborn child had prompted him to get tested, and to support his wife. The couple now have two healthy, HIV-negative children.

The experience has made Mernat consider becoming a male champion. “I have great joy seeing my two children looking healthy like this – if you look at them, you cannot believe that their parents are HIV-positive.”