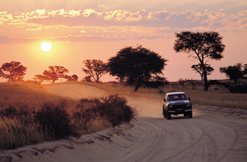 In January 2009 rally drivers will embark on a race across three Southern African countries – without a drop of petrol in their tanks. The Zero Rally Africa is only open to cars that run on alternative sources of fuel such as electricity, solar power, hybrid fuel, biofuel and hydrogen.

The 12-day race will be entirely carbon-free and, say the organisers, a demonstration of the immense value of sustainable energy in a time of climate change caused in part by fossil fuels.

Indian vehicle manufacturer Mahindra will provide the race with biodiesel Scorpio SUVs. A conference on renewable energy and potential applications for development, especially in Southern Africa, will be held in Cape Town after the finish.

The 4 000km route will lead cars through Zambia and Namibia, taking in some of Africa’s most spectacular scenery, before ending in Cape Town. The objective of the race is to demonstrate that alternate-fuel cars can both cruise the city streets and successfully travel through harsh conditions and across long distances.

The drivers will start their engines in Livingstone next to the Victoria Falls in Zambia, heading off for 200km before crossing the Zambezi River at Seskeke, over the Katima Mulilo bridge into Namibia, and into the town of Katima Mulilo. The bridge is part of the so-called Trans-Caprivi Corridor, a 2 500km tar road which connects Zambia’s copper belt with Namibia’s sea port of Walvis Bay. Trade in the area has increased as a result of the new infrastructure, and local businesses are today enjoying an investment, tourism and construction boom.

The route then passes through the Caprivi Strip, also known as Itenge, a narrow area of northeast Namibia 480km long and just 80km wide. This is a strategically significant region of Southern Africa which saw much military action during the Rhodesian Bush War from 1970 to 1979, the period of tension between the African National Congress and the South African government from 1965 to 1994, and the Angolan Civil War, a 27-year-long conflict between the ruling MPLA and rebel Unita, in which an estimated 500 000 people lost their lives.

Coming out of the Caprivi Strip, the route passes through Grootfontein and the copper- and lead-mining centre of Tsumeb before heading for the world-famous Etosha National Park, one of the world’s finest game reserves and at one time the world’s largest. Etosha is a word used by local Owambo inhabitants, meaning “great white place”.

Etosha is dominated by the 500 km2 Etosha Pan, a mineral pan that covers about 25% of the park. The pan is part of the Kalahari Basin, formed about 1 000-million years ago. During the rainy season shallow rivers and waterholes along the southern edge of the pan attract spectacular herds of game and flocks of wading birds, and here vehicles may have to give way to lion, rhino, elephant and zebra.

Out of Etosha, the route heads past the Brandberg (Afrikaans for “fire mountain”), Namibia’s highest mountain, located in the north-western Namib desert, the oldest desert on earth. The region is of great spiritual significance to the San Bushmen and is home to the White Lady rock painting, as well as more than 45 000 individual pieces of rock art.

The rally will then turn towards the small tin-mining town of Uis before taking a day’s break in the Namibian capital Windhoek. The next day the group will head south to Rehoboth, Solitaire, and then Aus, situated on the edge of the diamond mining area known as Sperrgebiet. From Aus, the vehicles head for Rosh Pinah, another mining town near the South African border.

They will cross into South Africa at Noordoewer on the north bank of the Orange River, which arises in Lesotho’s Maluti mountains some 2 000 km to the east. From here they drive to the corresponding town on the south bank, Vioolsdrift. The route will take the drivers down the west coast of South Africa, passing through the wool-producing area of Calvinia and proceeding to the university town of Stellenbosch in the heart of the Cape Winelands.

Stellenbosch is the second-oldest community in the Western Cape, established in 1679 by Simon van der Stel, the governor of the Cape Colony. It is also an important cultural centre, home to the Stellenbosch Conservatoire, the country’s oldest music school. From here it is a short drive to Cape Town, where drivers can finally put their feet up and relax.

The rally highlights South Africa’s burgeoning alternative-energy sector, with biofuels in particular being developed by a number of different companies. One is Biodiesel One, which manufactures biodiesel from vegetable oils and animal fats. The product is made entirely from recycled cooking oil and used mostly commercially, in generators, diesel equipment, vehicles, and marine vessels.

Used cooking oil often presents a problem when it comes to disposal. In many cases the used oil simply goes back into animal food or is even filtered and sold to communities for reuse, even though it is linked to carcinogenesis. Biodiesel One safely disposes of used restaurant oil, and works to educate restaurants about the hazards of reusing vegetable oil too many times.

Earlier in 2008 South African fuel manufacturer Sasol became the first company worldwide to win official international approval for its 100% synthetic jet fuel, which will be used in commercial airliners. Tests have shown that the fuel’s lower sulphur content make its emissions lower than those of similar fuels derived from coal.

Towards a cleaner South Africa

South Africa has large coal deposits and is heavily dependant on the resource for its electricity production. An initiative announced in July 2008 by the Department of Environmental Affairs and Tourism will see less use of coal as an energy source and more development of energy efficient measures. In addition, a carbon emission tax may be imposed on the country’s worst offenders.

Minister of Environmental Affairs Marthinus van Schalkwyk briefed parliament on the plan, outlining a scenario that will see greenhouse gas emissions rising to a plateau by 2025 and then starting to decline by 2030 – provided action is taken now.

Organisations around the country are already conducting extensive research into alternative sources of fuel. In 2007 the South African National Energy Research Institute, a subsidiary of the Central Energy Fund, awarded three chairs of energy research, worth R10-million (US$1.3-million) over five years, as part of an initiative to boost scientific research in South Africa.

The senior chair of energy research for biofuels and other clean alternative fuels was awarded to Prof Emile van Zyl of Stellenbosch University. The university opened its progressive Centre for Renewable and Sustainable Energy Studies in 2007, training postgraduate students in technical expertise which will help to unlock South Africa’s renewable energy resources, while also developing technology for sustainable energy utilisation.

The other two chairs were awarded to Prof Sanette Marx of North West University, and Prof Rosemary Falcon of Wits University.

Van Zyl says that South Africa has the potential to become a significant producer of renewable bioenergy and is also poised to become a major player in the biofuel industry. However, for now the biofuel development programme has been cut back because, according to Minister of Minerals and Energy Buyelwa Sonjica, food security and rising food prices are of greater concern.

The Department of Minerals and Energy has set up an office to oversee funding for renewable energy technology. Sonjica acknowledges that one of the barriers to the introduction of more renewable energy in local industry is the high capital outlay, and once these initial barriers are overcome more funding for research and development will become available.

In June 2008 South Africa’s first renewable energy initiative to actually contribute to the national grid went live. The Darling wind farm, developed at a cost of R75-million, comprises four turbines of 1.3 MW capacity each, capable of generating 5.2 MW of clean energy in total. Construction of the turbines took two years, and there are plans to add six more 1.3 MW turbines in the future. Power from the plant will feed into Cape Town.

A national energy efficiency and demand side management hub, offering a postgraduate programme in both topics, is to be established at the University of Pretoria. The initiative is driven by the South African National Energy Research Institute, which will fund it to the tune of R15-million over five years.