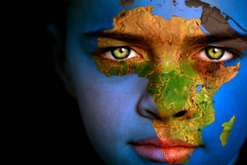 This year, Africa Day is celebrated under
the theme, “towards a united, peaceful
and prosperous Africa.”
(Image United States of Africa)

Africans across the world celebrated the 46th Anniversary of Africa Day, established in 1963 at the formation of the Organisation of African Unity, now known as the African Union.

This year, Africa Day was celebrated under the theme, “Towards a united, peaceful and prosperous Africa”, which will focus on efforts striving for a conflict-free continent.

To mark the day, United Nations (UN) secretary general Ban Ki-moon applauded the bold steps Africa had taken to renew itself, through bodies like the New Partnership for Africa’s Development, the Pan African Parliament and the African Union.

“We welcome the important steps made towards consolidating peace in Africa, including the historic, democratic elections held in the Democratic Republic of the Congo and the progress achieved in the Côte d’Ivoire peace process,” he said.

On the social ills still facing the continent, Ki-moon said, “I also share Africa’s pain and frustration at the persisting and widespread suffering on the continent.

“Extreme poverty – together with lack of access to basic education, health care and adequate nutrition – continues to prevent millions of talented, promising young people in Africa from fulfilling their potential,” he said.

According to the African Union’s website, Africa Day, “[We] acknowledge the progress that we, as Africans, have made, while reflecting upon the common challenges we face in a global environment.”

Remarking on the theme, African Union Commission chairperson Jean Ping said on the organisation’s website that the “continent is heading towards a more advanced democracy which is sometimes difficult to achieve.”

Ping cited the peaceful Ghana elections held in January this year as an example of political success stories on the continent, saying that it was proof that Africa isn’t only about conflicts.

On 25 May, Ethiopia, the headquarters of the African Union, hosted major celebrations to mark the day in the capital Addis Ababa.

Activities included an African bazaar, which consisted of arts and crafts from the entire continent. A cocktail dinner for guests included various African dishes.

In South Africa, Africa Day celebrations were held on 23 May in Johannesburg and Pretoria.

In Pretoria, the South African government celebrated the day with an event for children on the Union Buildings’ southern lawns.

The children were treated to a soccer-themed day, with a number of mini soccer matches and face painting with the flags of the different countries participating in the 2009 Fifa Confederations Cup.

This was the 11th year that the concert is held in Durban as part of the weeklong African Renaissance Festival, which will take place at venues between Richards Bay, Durban and Pietermartizburg in KwaZulu-Natal.

Further afield in Birmingham in the United Kingdom, the Pan African Congress Movement marked the day with a two-day celebration, which started on 24 May.

Seminars featuring international speakers, performances and a market place were all billed to be part of the two-day event.

Africa Day represents the day in 1958 when in Ghana, African countries gathered to officially support all liberation movements on the continent.

Ghana was the first country in Africa to receive independence in 1957, under the leadership of its first president Kwame Nkrumah.

Attending the Ghana conference were representatives from independent states who had been freed from colonialism and liberation movements working towards the independence of more African states.

In the years following the first meeting, topical issues that were tackled by the African States who gathered every year, included the ending of apartheid in South Africa, the continued struggle for independence for countries that were still colonised, political independence in the Caribbean and the US civil rights movement.

First dubbed Africa Freedom Day, the day was later changed to Africa Liberation Day in 1963 when the Organisation for African Unity was formed.

In 2002, the organisation was officially renamed the African Union (AU).

Speaking of the impact the AU has had on the continent, UN general assembly president Sheikha Haya Rashed Al Khalifa said she’s pleased the movement was still acting in line with the original union’s visions, “The transformation of the OAU into a dynamic African Union is a reflection of the continent’s political maturity and determination to assume greater responsibility for its own destiny,” said Al Khalifa.

“If fully supported, Africa can develop its rich potential and free its people from abject poverty, disease and political instability.”