The International Monetary Fund (IMF) has opened a window of possible funding opportunities for the bankrupt Zimbabwean government, says an analyst.

Noting improved cooperation on economic policies, the IMF announced on 6 May that it would resume technical support to Zimbabwe, but would not release any financial aid until Harare honoured its arrears. Zimbabwe owes the IMF about US$133-million (R1.1-billion).

The IMF’s re-engagement could help allay scepticism over the viability of the newly installed unity government and bolster confidence in prospective investors, according to Emira Woods, director of the Institute for Policy Studies, a US-based think-tank.

“Normally, financial creditors take their cue from the IMF,” she said. “This development therefore opens the doors for both public and private financiers to engage with the government of Zimbabwe.”

The executive board of the IMF adopted a declaration of non-cooperation in 2002 over Zimbabwe’s overdue financial obligations, and suspended technical assistance.

The news was welcomed by Elton Mangoma, Zimbabwe’s economic planning and investment promotion minister, who has been flying across continents to appeal for funds for his country.

“This is a key step for us,” he said. “We certainly hope that their technical expertise will help us strengthen our systems, which have been undermined by years of economic collapse and international isolation.”

But political analyst Rejoyce Ngwenya was more cautious. “The political environment in Zimbabwe is currently not conducive for any large-scale investor inflows,” he said. “The institutions of repression, both at legal and political levels, are still intact. Rights violations are also a daily occurrence, primarily because Robert Mugabe still dominates the government.

“I think investors remain wary of all this, and know that it will be unwise for them to start triggering rapid movement into Zimbabwe. They can only do so when proper governance systems have been restored.”

Earlier this week, two journalists and members of the Movement for Democratic Change, which is part of the government of national unity, were sent back to prison after being out on bail for two months. Following an international outcry, most of them were again released on 6 May.

The government has said it will need US$10-billion (R83.6-billion) to finance its economic recovery plan, but has managed to secure only US$400-million (R3.3-billion) from African countries.

Mangoma noted that Zimbabwe was willing to fulfil its outstanding financial obligations to creditors, but the government was bankrupt and “we are doing the best we can to bring the country back to its feet.” 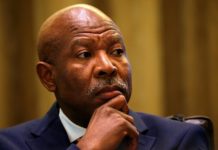