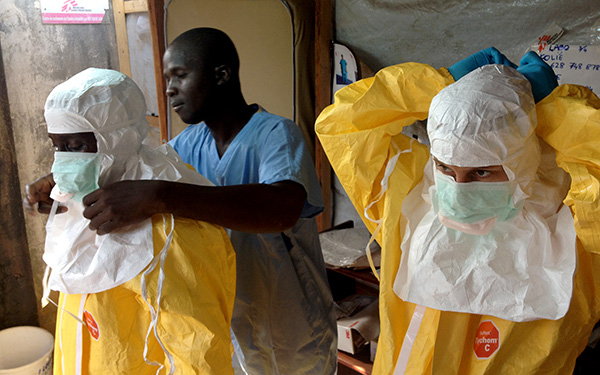 Health workers suit up to treat Ebola patients in Guinea during the initial outbreak of the virus in April 2014. (Image: Echo)

• Africa Stop Ebola – in song
• Southern Africa remains free of Ebola
• Animation tells the story of Ebola and how to avoid it
• Doctors Without Borders treat Ebola, one patient at a time
• Ivory Coast take on ice bucket challenge helps fight Ebola

Around the world, international migration from countries in West Africa affected by the Ebola crisis is being restricted. Australia has imposed temporary visa restrictions, most neighbouring countries in sub-Saharan Africa have tried to close their borders, and in the United States, lawmakers are also pressing for travel bans, as well as compulsory quarantine for returning health workers. A number of airlines – including British Airways – have stopped flying to the affected countries.

Yet evidence from previous health crises demonstrates that they rarely result in international migration; that travel bans don’t work, and may even be more harmful than the problem they intend to address.

First, travel bans are unnecessary. Large-scale population movement as a direct result of a health crisis is rare. When it does occur, as for example during a plague outbreak in Surat, India in 1995, and from Beijing during the 2003 SARS outbreak, migration tends to be internal (to regions directly outside the immediate crisis zone), temporary, and early on in the health crisis when information is often scarce, contradictory or inaccurate. The widespread implementation of international health regulations, a preventive approach to the international spread of disease, is one reason. Collective actions also reduce the risk of disease and offer an alternative to fleeing.

During the 2009 H1N1 pandemic, for example, school closures, work pattern adjustment, self-isolation of symptomatic individuals and advice to their caregivers, and cancellation of mass gatherings helped mitigate the pandemic. The gradual improvement of the understanding of infectious diseases, their causative agents, modes of transmission and evidence-based ways to control their spread have also empowered individuals to adopt preventive behaviour, in many cases pre-empting migration.

Second, travel bans are ineffective. The current understanding of the dynamics of disease transmission is that diseases cannot be stopped at borders. Outbreaks such as those of SARS or H1N1 have shown that the volume and speed of global trade and travel mean that diseases can be disseminated worldwide in a matter of days. Mathematical models provide little evidence that travel restrictions would reduce the spread of disease.

This evidence is reflected in the international health regulations, which focus less on control measures at borders and more on detection and response at source, and on enabling global communication channels. Where international health regulations do refer to migration, they focus on travel-related public health measures to limit the spread of disease, such as vector-control measures at points of entry by air, sea or land. These are already in place in West Africa.

Third, travel bans risk doing more harm than good. Travel restrictions and enforced quarantine after return will reduce the flow of health workers to West Africa exactly when they are most required, and restrictions on transportation would also affect the provision of medical supplies and humanitarian assistance. More broadly, cutting off the affected countries will further damage their economies, which are already under strain from the Ebola crisis, for example by disrupting commercial and trade flows. All of this is likely to undermine the ability of governments to prevent Ebola and its transmission.

In a world of rapid travel, trade and climate change, where infectious diseases and other health problems are on the rise, greater efforts should be made to encourage governments and organizations that work in the field of migration and with migrating populations to understand and abide by international health regulations. This would make it easier to prevent migration related to health crises while ensuring the best possible protection against disease.

More research is required on how health crises affect migration, particularly in distinguishing health from other motivations to migrate. We need greater coherence between international health regulations and migration policies and practices at the national and international levels; this would help inform government responses, which can prevent migration during health crises. And at the national level, there must be greater coordination between government agencies separately tasked with migration and health mandates.

Khalid Koser is chair of the Global Agenda Council on Migration. This article was first published on the World Economic Forum blog.