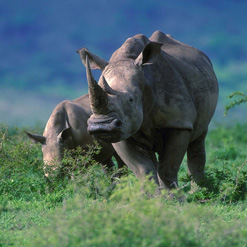 The rare and magnificent white rhino,
hunted and killed for its horn.
(Image: South African tourism)

With only four northern white rhinos left in the wild, the fight is on to save one of the world’s rarest animals from dying out. Now a special cloning technique may provide the answer to this desperate situation.

The northern white or northern square-lipped rhino (Ceratotherium simum cottoni) is one of two subspecies of white rhino – the other one is the southern white rhino. The handful of remaining animals is located in the Garamba National Park, Democratic Republic of Congo.

The region’s instability has hampered efforts to protect the animals and poaching, mainly from Sudan, has taken a severe toll. Sudanese poachers are responsible for the decimation of much of the wildlife in this region, as well as in Central African Republic and Chad.

Data from the World Wildlife Foundation (WWF) reveals that even as late as the 1960s there were about 2 000 northern white rhino. Poaching reduced the population to about 15, according to a count in 1984. Thanks to intervention from various sources the population doubled but poaching has again intensified to the point where the species now stands on the brink of extinction.

There are also 10 northern white rhinos in zoos, many in Eastern Europe, exchanged by former Ugandan dictator Idi Amin for arms in the 1970s. Only two of these, however, are fertile females capable of breeding.

Protecting animals and their habitats

The cloning technique is not the same as that which created Dolly the sheep over ten years ago. On the contrary, many scientists believe that conventional cloning is inefficient, and takes attention away from the more realistic problem of preserving wildlife habitats. This is a major threat to many species.

Professor Robert Millar, director of Edinburgh University’s Reproductive Sciences Unit, who is leading the study, says, “There are a lot of African animals under the threat of extinction. We want to protect their genomes, but you have to protect their habitats as well.

“This is one of the ways of dealing with the problem, especially when the animals get to such low numbers in the wild. It is a method we need to start to get into place as an insurance policy – it’s clearly do-able according to the laboratory work.”

Millar has enlisted the services of Dr Thomas Hildebrandt, a renowned conservation scientist from the Berlin Institute for Zoo and Wildlife Research, as well as those of Sir Ian Wilmut and Dr Paul de Sousa of the Scottish Centre for Regenerative Medicine in Edinburgh.

Hildebrandt is a world authority on elephant artificial reproduction who has done extensive field research in South Africa’s Kruger Park. He perfected his technique through autopsies on elephants culled from overpopulated South African herds. Wilmut is the leader of the team that produced the cloned sheep Dolly in 1996.

The method, tested successfully on rodents in the laboratory, is based on a Japanese technique that uses genetic engineering to re-programme adult cells back into an embryonic state. From here the cells can develop into any of the body’s specialised tissues – including sperm and eggs. The fertilised northern white rhino egg can then be nurtured in a surrogate mother, in this case a southern white rhino.

The rhino’s skin cells will be used for this purpose and mixed in vitro with embryos of its close relative the southern white rhino. The offspring, strictly speaking, will not be clones but rather chimeras – the medical definition of this term is a creature composed of two genetically distinct types of cells.

The chimeras will then hopefully breed in captivity, producing both northern and southern white rhinos, which can then be released back into the African wild.

However, cautions Swiss-based conservation organisation WWF International, it is equally important to ensure that the habitat of the northern white rhino is made safe for the new arrivals – otherwise the poaching will simply continue. Most experts feel that a dual approach, using both strategies, will produce the best results.

If the technique succeeds with the white rhino it will be used on other endangered species such as the African wild dog, the Ethiopian wolf and the pygmy hippo. These are three of the projects currently underway at the Institute for Breeding Rare and Endangered African Mammals. The Lapalala Wilderness nature reserve in Limpopo province is one of the partners in this initiative.

Over the years rhinos have been prime targets for poachers – killed almost exclusively for their horns. The illegal trade in rhino horn is driven by medicinal and cultural factors. It is used as an ingredient in eastern medicine, especially in China, where people believe it can cure fever.

In Yemen and Oman the curved dagger known as jambia is worn by males over the age of 14 as an accessory – it signifies manhood. The most significant part of this weapon is the hilt, which determines its value. The saifani handle, made of rhino horn, is the most sought after.

In Southern Africa it is Zimbabwe, Namibia and South Africa that have been hardest hit since they hold 93% of Africa’s black and white rhinos. The penalty for poaching in South Africa is R100 000 or 10 years in prison, or both.

Garamba national park, established in 1938 and now a Unesco World Heritage Site, is under intense fire from poachers. There are reports of staff losing their lives in anti-poaching operations, and the rhino population has declined sharply. The site is also on the World Heritage in Danger list.

According to a National Geographic report, conservationists have for some time been arguing for international government intervention in this matter. They say the criminals, and the Sudanese government, should be taken to task over the rampant poaching. There is no apparent evidence that the Sudanese government is involved, but experts believe that some of the trade in rhino horn may be encouraged by individuals in the regime.

By contrast, the southern white rhino is something of a conservation success story. More than 100 years ago it was thought to be extinct, until the discovery in 1895 of a herd of fewer than 100 individuals.

Conservation efforts have now resulted in the southern white rhino being classed as “near threatened” – as opposed to critically endangered. It is the only non-endangered rhino species. More than 11 000 animals exist, mostly in South Africa, where legislation and efficient conservation management protect them.