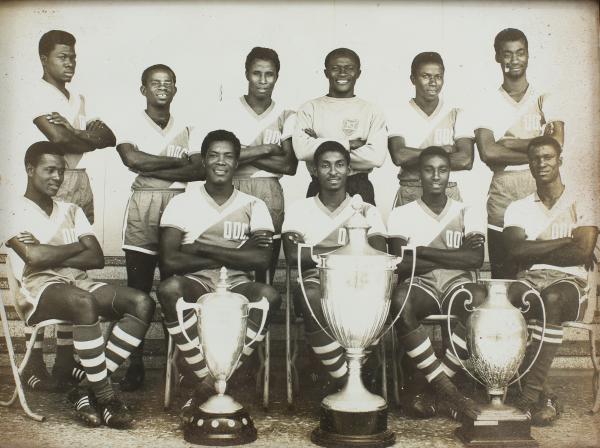 Africans and their colonisers became equals once they stepped onto the football pitch, and it even gave the former the chance to show their superiority over their oppressors. Here, Ghana’s football team of the 1960s pose with the international trophies they had won. The Black Stars, as they are still known, were handpicked by Ghana’s leader Kwame Nkrumah. (Image: Yenkassa, Flickr)

• Africa Cup of Nations: some facts and figures
• Bafana at Afcon 2015: the full squad
• African footballers call on their juju men
• Who will become a star at Afcon 2015?
• Beefy Cameroon gives South Africa a taste of Afcon

Zambia’s late and great football commentator Dennis Liwewe once said that when David Livingstone arrived in the country, he brought three things with him in his bag: his medical kit, his Bible and a football.

Whether this was true or not did not matter, said football historian David Goldblatt, but it was the one good thing the colonialists had brought to the continent. Goldblatt calls the arrival of football in Africa an “epoch-making event” on par with the arrival of the cocoa bush on the Gold Coast, saying that it is “without competitor Africa’s game”.

The game had come a long way from the days when British sailors would disembark with a ball in tow and enjoy a kickabout on the quayside, wrote Goldblatt in his substantial history of the game, The Ball is Round. However, it was soldiers and colonial administrators who brought the sporting code with them.

The first recorded game in South Africa was played in 1866 in Pietermaritzburg, Goldblatt wrote, but he did not reveal the teams or score. “In South Africa the British Army played African scratch teams at the siege of Mafeking, while in Cape Town military regiments were setting up their own football association and playing a regular football competition as early as 1891.”

Jack Lord, a writer for the blog Pitch Invasion, said in his history of African football that European teams and coaches started appearing in various parts of the continent in the early to mid-1900s, which helped to transform the game. Scottish club Motherwell toured South Africa in the 1930s and brought with them the tight passing and collective ethos that “inspired a tactical revolution among local teams”.

Lord added that in 1950s Brazzaville, Congo, a French coach rebelled against the prevailing British style by introducing short passes and man-marking. His tactics helped his team dominate the league in which they participated. “An upstart team in Ghana during WWII promised more vaguely that its ‘tactics’ would defeat the ‘dribbling’ of their rivals,” said Lord.

Despite being a colonialist’s game, Africans adopted the sport quickly and intensely. But just why they did so remains a mystery. Goldblatt gave two suggestions. The first is the marriage of both Western and African cultures. By adding a ball to Africa’s rich dance traditions, a “universe of playful possibilities” opened up. While this may be an irresistible notion, Goldblatt said it was unprovable.

His second suggestion is more political. Quoting Ferhat Abbas, the Algerian political leader in the early 20th century, Goldblatt suggested that for Africans the game could have been used as an equaliser – or even a show of superiority – between the colonialists and the colonised. Abbas once said: “They rule us with guns and machines. On a man-to-man basis, on the field of football, we can show them who is really superior.”

Lord said the game was a “useful supplementary income for players”, which was yet another reason Africans took to it. “Teams negotiated hard over appearance fees, transport allowances and prize money. In friendly matches it was common for the winning side to take 60% of the prize fund, and the losers 40%.”

However, playing for money had its downside; Lord gave an example from Northern Rhodesia in the late 1930s. A missionary complained that all the star teams played for money. “The same missionary also witnessed a match in which the visitors bet on themselves to win and confidently spent their stake in the local beer hall: ‘Unfortunately they lost and the match ended in a free fight in which spectators joined,'” wrote Lord.

He added that in urban areas, football played a social role, especially for migrant workers who used the game to replace the social support they had in their rural homes.

WATCH: George Weah highlights during his time at A.C. Milan

Despite being a force for good, football was used as a tool by political authorities to divide society along racial and cultural lines. In South Africa, for example, teams and associations were separated according to the four major racial groups.

Lord said that because the game was popular among children, it exposed Africans to inequality from an early age. One such person was the first president of independent Algeria, Ahmed Ben Bella, whose school had two football teams: one French and the other Arab.

Racial division was not the only form of discrimination in football. Lord said teams often reflected identities based on religion and class. “In Obuasi, Ghana, Muslims played in a separate Mahommedans team. In Congo-Brazzaville, there were separate football teams for the clerks and manual workers of colonial enterprises. And football also reflected growing ethnic rivalries within multi-ethnic states.”

Yet at the same time, the game brought together people from different backgrounds and individuals often found ways of bridging the divide. Football coach Craig Hepburn played as a goalkeeper for an almost all-black Orlando Pirates team in the late 1980s. Being a white man in South Africa, he was conscripted into the South African Defence Force. Often after a game for Pirates, he would have to change into his army uniform and rush back to military duty, guarding against the same men he called his teammates.

At other times, he did not even get to play. “The army stopped me from playing. At one Kaizer Chiefs-Orlando Pirates derby I went to the stadium and the sergeant major told me I couldn’t play but could stand guard. So I did.”

Many African players came from underprivileged or war-ravaged countries, yet they still had the mettle to reach the heights of world football. In the 1990s, George Weah from Liberia and Ghanaian Abedi Pele rocked world football, with the former voted Fifa’s Player of the Year in 1995. They were part of a small African contingent plying their trade in Europe.

The current generation of African players, however, are a much larger group and several of them are on par with or even better than their European and South American counterparts.

Ivorians Yaya Toure and Didier Drogba, and Cameroonian striker Samuel Eto’o are some of the finest Africa has produced. They are also the three richest African footballers, with Toure worth $65-million (R753-million), Drogba $70-million (R811-million) and Eto’o around $90-million (R1-billion).

Toure plays for English Premier League champions Manchester City and was voted the league’s best player last season. He received his fourth consecutive CAF African Player of the Year award on 8 January. Toure has enjoyed spells at Greek club Olympiakos and at FC Barcelona. At all three European clubs he has represented, Toure has helped them to win five league trophies, three cups, one Uefa Champions League and one Fifa Club World Cup.

During his first spell at Chelsea, which lasted eight years, Drogba was instrumental in helping the club win Premier League titles, four FA Cups and a Uefa Champions League. Eto’o was even more impressive during his years at FC Barcelona and Inter Milan. He helped both teams to win four league titles, three cups, three Uefa Champions League trophies and one Fifa World Club Cup.

Algeria have also produced some of the world’ best players in recent years. At the moment they are considered the continent’s best football nation and are 18th on the Fifa World Rankings.

On that list of great talents are BBC African Footballer of the Year for 2014, Yacine Brahimi, Sofiane Feghouli, and Nabil Bentaleb, all of whom play for major clubs in Europe. Football legend Zinedine Zidane, Samir Nasri and Karim Benzema may all have been born in France and played for that national team, but they are all of Algerian descent.

Although the continent produces some outstanding individuals, its national teams continue to struggle on the world stage. Toure, Drogba and Eto’o have been highly successful at club level, but less so in national colours, and the furthest any African team has gone in a World Cup is the quarter-finals. Cameroon, Ghana and Algeria share this record.

Despite these setbacks, this year’s Africa Cup of Nations (Afcon) in Equatorial Guinea, which kicks off on Saturday, 17 January, still promises to be spectacular, with at least four teams capable of winning it.

Ivory Coast may not have been a powerhouse since last winning the tournament in 1992, but their current side can certainly challenge even some of the best European sides. They have featured in the previous two World Cups and Afcon tournaments. And with Toure captaining the team, they have a stellar leader.

Ghana have also become a force within the continent, with Andre Ayew, Asamoah Gyan and Michael Essien being the outstanding performers in the side. Algeria and current Afcon holders Zambia make up the rest of the contenders.

The more traditional powerhouses of African football – Egypt, Cameroon and Nigeria, which respectively have seven, four and three Afcon titles – have been on the wane in recent times. Cameroon had a terrible campaign at the 2014 World Cup, what with infighting and unimaginative play. They were knocked out of the first round. Nigeria and Egypt have not even qualified for this year’s Afcon.

More than a century of African football culminated in the continent’s first ever Fifa World Cup in 2010. With South Africa as hosts, the world got to see just how football crazy Africans are. The event forced the world to see Africa as a serious football continent and not just a place where boys ran around barefoot kicking a rag ball on a dusty field, as was the common image, according to Lord.

Football in Africa is not and was never just a game. It is a way out of poverty, a tool for reconciliation or division, a brief escape from the harshness of life, and a part of one’s identity.

As Goldblatt said: unlike the Western medicine and the religion that Livingstone brought to the continent, the football became an “emblem of pride and independence and thus inevitable and instrument of political and social struggle”. It is truly Africa’s game.