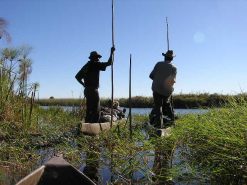 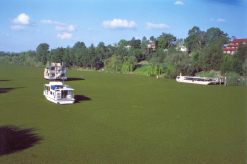 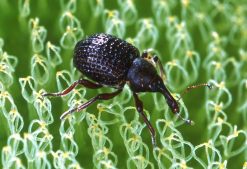 The spectacular Okavango Delta in Botswana is under threat from a prolific South American weed, but a tiny Brazilian weevil that feasts on the invader is helping bring it under control.

Salvinia molesta, a kind of water fern, grows so quickly that under favourable conditions it can double its dry weight every two to three days. The leafy pest has struck in many parts of the world, including Australia, the Pacific, Southeast Asia and other parts of Africa. Once entrenched, it’s very difficult to eradicate.

S. molesta, also known as Kariba weed because it infested much of the Kariba dam in Zimbabwe in the 1960s and posed a serious threat to the dam’s hydroelectric plant, does not root itself in the substrate. Instead, it forms free-floating colonies of rhizomes, roots and leaves that form dense colonies.

These mats of vegetation can be up to 1m thick and cause major obstructions to water traffic, as well as depriving fish of much-needed oxygen. Salvinia is also a serious health hazard as the dense blankets of growth are an ideal haven for disease-carrying mosquitoes. Livestock and toddlers have also been known to become entangled in it.

In the Okavango, fishermen’s livelihoods are affected as well as tourism, as the punt-like local boats known as mokoro and other craft are unable to navigate the waterways.

This is a critical problem as every year tourists flock to the delta’s many luxurious lodges or houseboats. Many regard travelling through the Okavango on elephant-back as the ultimate experience.

Scientists believe the weed made its way into the delta along the many rivers that flow southwards from the Angolan highlands and join along the way to eventually become the mighty Okavango river.

Fortunately there is an effective biological control for the pest. The weevil, Cyrtobagous salviniae, a tiny 2mm-long insect, can keep salvinia at bay.

“Spectacular results have been obtained in parts of Australia and it seems likely that they will be repeated elsewhere,” said a report on the website of Pacific Island Ecosystems at Risk. “Similar results have followed the release of the weevil in Papua New Guinea, India and Namibia.”

This method is also highly successful in South Africa, where early summer outbreaks are usually tamed by midsummer once the weevils have been released. The deadly little creatures have been used to great effect in at least 13 countries.

C. salviniae, like the weed, hails from Brazil and is host-specific, meaning that it feeds exclusively on the fast-growing plant. Adult weevils munch on the tender buds and leaves at the tips of the plant, suppressing growth of new shoots, while the larvae make inroads into the rhizomes. Eventually bored holes fill up with water, and the salvinia mat turns brown and begins to sink.

Weevils are more effective than other methods of control. These include manual removal, which often fails as the plant can outgrow attempts to remove it, and chemical intervention. The problem here is that herbicides put other plant species at risk, and have to be applied regularly.

C. salviniae came to Africa in 1983, when it was used in Namibia’s Caprivi region. In heavily infested or cooler areas, control may take up to three years, but often it takes less than 12 months for the busy weevils to do their work.

The eradication plan will be most successful in the delta if local communities and tourism operators join forces.

With expert help, locals and representatives from the tourism sector are learning to correctly identify the weed and breed the insects, which live for just 60 days, then release them into the waters of the Okavango. They are also asked to monitor and keep records of their salvinia control efforts.

Training falls under the Biokavango initiative, a five-year biodiversity conservation project funded by the Global Environment Facility, the government of Botswana, non-governmental donors, and tourism operators. It is implemented through the UN Development Programme country office in collaboration with Botswana University’s Harry Oppenheimer Okavango Research Centre, based in Maun in the southeast of the delta.

“It is now up to the communities and tour operators to make sure that they work hard in breeding the weevils,” said Ministry of Tourism, Wildlife and Environment representative Steve Monna.

The research centre reports that one of the delta’s major hospitality drawcards, the lavish Sandibe lodge, part of the &Beyond group, has even set up an “adopt a weevil” campaign.

With guidance from Biokavango and the Botswana Department of Water Affairs, Sandibe is running a pilot weevil breeding and distribution programme. The weevil adoption scheme encourages visitors to donate towards the company’s salvinia control programme, run with the help of local communities.

Chair of the Okavango Fishermen’s Association, Faosiko Wake, summed up the situation: “Fishing is a source of income for most of us in this part of Botswana, and if it means working day and night to destroy this weed which is threatening our fish, then let it be so.”

The spectacular Okavango, the world’s largest inland delta, has its source far to the west in the highlands of central Angola. Here numerous tributaries join to form the Cubango river, which crosses into Namibia and is known as the Kavango, before finally flowing into Botswana, where it is known as the Okavango.

Millions of years ago the Okavango River flowed into a vast inland lake known as Makgadikgadi, which survives today in the form of the Makgadikgadi salt pans, lying to the southeast of the Okavango.

Over many years geological forces altered the river’s flow and the dammed-up waters became the Okavango delta, an intricate network of waterways in the middle of the Kahalari desert.

Summer rains in Angola are responsible for feeding the delta. Although the rainy season starts in October, the waters take many months to arrive in the Okavango, only reaching the delta the following July. This is because the river’s course varies little in elevation, dropping only 60m over the entire 450km distance.

Reports put the volume of water entering the Okavango every year at a mind-boggling 11-trillion litres. At the peak of the annual floods, which are gentle, the delta can cover an area of around 16 000 square kilometres, but in the dry period it spans just 9 000 square kilometres.

As the waters rise, wildlife of all kinds moves into the area. Lion, hyena, zebra, Nile crocodile, elephant, buffalo, wild dogs, and lechwe and sitatunga antelope are just a few of the diverse species found in the delta’s channels.

The complexity of the Okavango’s ecosystem and the sheer diversity of its fish, birds, and animals attract research biologists, zoologists, botanists and other experts from all over the world.

How the family of African states helped end apartheid 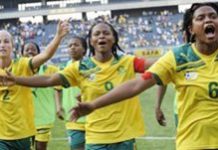 Banyana in 4-0 win over Botswana 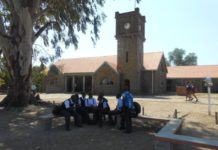 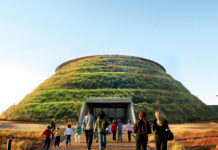