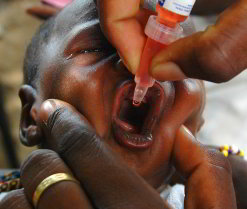 A child receives a polio vaccine at a Unicef
vaccination drive in a small village in Niger.
(Image: Edward Parsons, Irin News)

Burkina Faso has become the first country to introduce a meningitis vaccine designed specifically for the African continent, where up to 450-million people are at risk from the disease.

It is hoped that the vaccine MenAfriVac – developed by the UN’s World Health Organisation (WHO) and the international health NGO PATH – will help to eliminate meningococcal A in 25 countries in Africa’s meningitis belt, which stretches from Ethiopia to Senegal.

“With a one-time investment to vaccinate populations in all countries of the meningitis belt, nearly 150 000 young lives could be saved by 2015, and epidemic meningitis could become a thing of the past,” said WHO director-general Margaret Chan in a statement.

“This is within reach. We must not fail.”

In 2009, 14 African countries reported more than 88 000 cases and 4 000 deaths from meningitis. The worst-affected patients usually die within 24 to 48 hours of the onset of symptoms and up to 20% of survivors suffer brain damage, hearing loss or learning disabilities.

MenAfriVac is the latest in a group of new vaccines that could result in a significant drop in infant mortality in Africa. In 2009 a handful of countries, including the Gambia and Rwanda, introduced the pneumococcal conjugate vaccine into their national immunisation programmes; pneumococcal disease kills an estimated 800 000 children under the age of five annually, most in the developing world.

South Africa introduced a vaccine for rotavirus – a diarrhoeal disease that kills an estimated 500 000 children globally every year – in 2009. Several African countries are also considering introducing routine vaccination of young girls against human papillomavirus, which can predispose them to cervical cancer later in life.

Vaccine stakeholders have had to devise innovative ways to cut costs. MenAfriVac costs just US$0.50 (R3.40) per dose; according to its developers, a public-private partnership model enabled the development of the vaccine at less than a 10th of the $500-million (R3.4-billion) usually required to develop and bring a new vaccine to market.

The Global Alliance for Vaccines and Immunisation (GAVI) – which supports 72 poor countries with vaccines – has raised more than $5-billion (R34.2-billion) through traditional fundraising mechanisms and innovative financing, such as the sale of capital market bonds and advanced market commitments, where donors commit money to guarantee the price of vaccines once they have been developed, assuring producers a viable market.

Competition has also played a role in lowering vaccine prices; for instance, the price of hepatitis B vaccine has declined from $0.59 (R4) per dose in 2000 to $0.20 (R1.40) today. The price of a five-in-one vaccine has also recently dropped significantly thanks to increased demand and the entrance into the market of a new manufacturer.

The alliance also works through co-financing, where developing nations pay for part of the vaccines being used in their countries; for example, between 2008 and June 2010, Rwanda co-financed GAVI’s support with nearly $1.9-million (13-million).

GAVI’s new five-year strategy, which includes plans to vaccinate more than 240-million children – including 90-million against pneumococcal diseases and 53-million against rotavirus – will cost $6.8-billion (R46.5-billion) until 2015.

The organisation still needs to raise $3.7 billion (R25.3-billion) of this, which it says could potentially save as many as four-million lives by 2015.

GAVI has contributed more than $85-million (R581-million) to the effort to eliminate meningococcal A meningitis in Africa, but requires another $475-million (R3.2-billion) to protect the entire meningitis belt. According to its developers, the introduction of MenAfriVac and the resulting reduction in meningitis could save over $120-million (R820-milliom) up to 2015.

According to Saad Houry, deputy executive director of Unicef, it was important to continue to fund vaccines and build on the progress of vaccine programmes, especially as they often brought additional benefits to health systems in developing countries.

“Vaccines have been very important in reducing mortality from infectious diseases, but they have also been useful in strengthening health systems,” he said.

“In countries like Rwanda where vaccine coverage is over 90%, health systems are able to take advantage of the contact made during vaccination to provide vitamin A, provide ante- or post-natal care, bed nets and nutritional advice.”

Houry stressed the need to begin to think of vaccination as more than just an intervention, but as an investment in the future of the developing world.

“So we know how to deliver a vaccine – how do we build on this? Once we have enabled a child to live past the age of five, there is now a responsibility to ensure that they are given the chance to develop to the best of their ability – to ensure they have good nutrition, continued access to health and access to good education,” he added.

“Vaccination is just the beginning.”