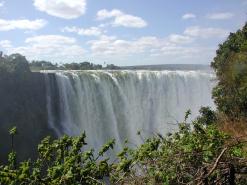 In 2013 the Victoria Falls will provide the
backdrop for the 20th general assembly of
The UN World Tourism Organisation.
(Image: Wikipedia)

Located in the south-eastern corner of
the Mosi-oa-Tunya National Park, the
Falls Resort is the main venue in Zambia.
(Image: Zimbabwean tourism ministry)

In a first for the Southern African Development Community (SADC), the next general assembly of the UN World Tourism Organisation (UNWTO) will take place in magnificent Zimbabwe, with northern neighbour Zambia as co-host.

UNWTO general assemblies are held every two years. Previous sessions have taken place in far-flung nations such as China, Colombia and Kazhakstan, but in Africa, only Senegal and Egypt have had the privilege.

The next session, the 20th, takes place for the first time in Southern Africa, and has been confirmed for 24 to 29 August 2013.

The venues are the two border towns of Victoria Falls in Zimbabwe and Livingstone in Zambia.

Both towns are situated close to the spectacular 1.7 km-wide Victoria Falls or Mosi-oa-Tunya, meaning “the smoke that thunders” in the Tokaleya dialect of the regional Tonga language.

The winning hosts were announced in October 2011 by UNWTO secretary-general Taleb Rifai, after all the competing bids were presented at the organisation’s headquarters in Madrid, Spain, a couple of months before.

Zimbabwe and Zambia have both had solid experience of hosting high-level international events, such as the World Health Organisaton’s regional summit, which took place in 2000 in Zimbabwe, the 2011 conference of the African Insurance Organisations in the same country, and the 2010 Eastern and Southern African Accountants’ Conference, held in Zambia.

A UNWTO inspection team visited the two countries at the end of February 2012 to familiarise itself with the preparations, and declared itself happy with the progress.

The representatives added that they were inspired by the unity of purpose between Zambia and Zimbabwe, and that they would return in August to help smooth out any remaining issues..

Zimbabwe’s minister of tourism and hospitality, Walter Mzembi, said the two countries were working well together in making their arrangements.

“Zimbabwe and Zambia are having a smooth flow of operations in the planning of hosting the conference,” he said. “We have always been one even from the time when we were one federation; Rhodesia and Nyasaland. We continue to unite even as we invest efforts in hosting this event.”

Rifai said he was satisfied and impressed with the report of the inspection team.

“We received with satisfaction the news that the inspection team is happy with preparations to date,” he said in a statement. “We look forward to all preparations being concluded satisfactorily ahead of the event.”

Rifai himself is scheduled to visit the co-hosts at the end of May 2012, and is expected to meet with tourism players from the government and private sector, as well as representatives from civil society and the media.

The secretary-general said that his historic visit would also have a political element.

“Let’s use it to raise awareness and build excitement around the continent and beyond for the next general assembly,” he said. “Even the general public should be interested in this important event.”

Investment to benefit the area in the future

Reports in Zimbabwean media state that the town of Victoria Falls is undergoing a facelift ahead of the tourism gathering.

Improvements are underway at the Victoria Falls District Hospital and the Victoria Falls International Airport, while other measures such as the relocation of the town’s dump site, the rehabilitation of roads, and the boosting of television and radio signals are also in progress.

While there are already a number of top-class hotels and resorts in the area, such as the popular Elephant Hills and the gracious century-old Victoria Falls Hotel, the latest investment will reap benefits in years to come, and in the short term, the town is expected to bring in more revenue from the UNWTO gathering than it does in an entire year.

“We will have some 180 countries, all members of the UN, visiting us,” he said, adding that the event will provide the chance for diplomatic engagement with visiting nations.

Tourism on the rise in Southern Africa

Tourism has always been one of Zimbabwe’s strongest assets. UNWTO Resource Mobilisation Committee chairman Desire Sibanda, who also works in the country’s ministry of economic planning, said that Zimbabwe’s tourism had recorded an upward trend during 2011, and looks set to continue in that direction.

“Zimbabwe is one of the fastest growing economies in Africa after Ghana,” said Sibanda, “and through the boost in tourism, the country can realise about 10% growth rate in the next year.”

Tourism is currently the fastest-growing sector of the Zimbabwean economy, recently overtaking agriculture to become the biggest contributor to the national GDP. The tourism sector, said Mzembi, is expected to increase its direct and indirect GDP contribution from 9% in 2011 to 15% by 2015, and support 120-million direct and 324-million indirect jobs by 2021.

“This is on condition that the current peace and stability in the country prevails and the country is able to spin a more positive image of itself,” he cautioned.

Zambia’s tourism statistics are also looking good. Evans Muhanga, marketing director of the Zambia Tourism Board, said in a statement that, although visitor figures for 2011 have not yet been finalised, the estimate is that some 906 500 tourists visited the country last year compared to the 815 000 arrivals recorded in 2010.

He added that Zambia was on track to break through the one-million visitor mark by the end of 2012.

However, the financial crisis in Europe has had an impact on the number of overseas visitors to the region, with Europeans finding it more cost-effective to tour within their own countries.

For this reason, said Mzembi, it was important for countries in the SADC region to plan ahead for the growth of their tourism industries. He named integration of the SADC region into a single tourism destination as one of the strategies to counter the European slowdown.

Recent developments such as the official launch of the Kavango-Zambezi transfrontier park, the biggest conservation are in Africa, would boost the region’s tourism potential. The park is reportedly working on leisure packages to complement the numerous social events already on offer to UNWTO delegates.