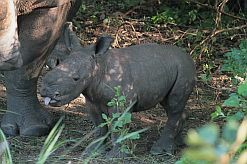 Young Obama is the first southern
white rhino calf to be born in Uganda
in 27 years. (Image: Ziwa Sanctuary) 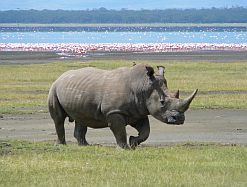 The southern white rhino is one of
conservation’s success stories.
(Image: Wikimedia)

Uganda has its own rhinos again – the first calf in 27 years was born recently at the Ziwa Rhino Sanctuary in Nakasongola district, central Uganda. The new arrival brings hope that the magnificent animal, now extinct in the country’s wilds, will thrive once again.

The birth is a coup for rhino conservation in the East African country. The Ugandan Wildlife Authority announced that the male southern white rhino calf (Ceratotherium simum simum) was born in June 2009 into a group of six white rhinos at the sanctuary.

First-time mom, 10-year-old Nandi, is one of two white rhinos that arrived in the country in 2006 as a donation from Disney’s Animal Kingdom in Orlando, Florida. The Animal Kingdom is accredited by the Association of Zoos and Aquariums, an international body.

Part of the first-ever relocation of rhinos from the US to Africa, Nandi and her brother Hasani were both born in the Disney Animal Kingdom. The two are a crucial element in the plan to reintroduce the white rhino into Uganda’s parks.

Their move followed the 2005 transfer to Ziwa of the four rhinos Taleo, Moja, Bella, and Kori, from the Solio Ranch in Kenya. Three of the six rhinos are male and three are female.

“We are joining with the government of Uganda and Rhino Fund Uganda in celebrating this milestone birth, which represents a significant accomplishment for wildlife conservation,” commented Dr Jackie Ogden, Disney’s VP of Animal Programmes and Environmental Initiatives.

The country now has nine rhinos, all in some form of captivity. The other two rhinos are currently in the Uganda Wildlife Education Centre, formerly known as Entebbe Zoo. They were brought in from Kenya’s Solio Ranch in 2001.

The new baby has been named Obama. The calf’s father originated from Kenya, as did the father of the current US president.

Under the terror regime of dictator Idi Amin, whose rule ended in 1979, and his successor Milton Obote, deposed for the second time in 1985, Ugandan wildlife declined. This was largely due to wholesale poaching of animals by both the army and civilians – and a number of reports cite the former as the worst offenders.

White and black rhinos were never seen in large numbers in Uganda and the highest total ever known was 38, recorded during the period 1974 to 1975. Within a decade poachers had killed every one of them for their horns, which were shipped to the lucrative markets of the Middle and Far East to be carved into knife handles or ground into aphrodisiacs.

Uganda is rebuilding its tourism sector after the political turmoil of the 1970s and 1980s, and it is hoped that an abundance of wildlife will help to lure the tourists.

Touted as “Africa’s friendliest country” by its tourism board, the country is currently ruled by President Yoweri Museveni, who has been in power since 1986 and has brought a measure of stability and economic growth to Uganda.

The black and white rhino, part of Africa’s big five, are highly popular and in great demand with visitors throughout its range of central, eastern and southern Africa. But poaching and habitat loss are the greatest threats to the animal’s survival.

There are about 17 500 wild white rhinos remaining in Africa, and over 4 000 black rhinos. The southern white rhino is classified on the International Union for the Conservation of Nature’s (IUCN) Red List as near threatened, while the northern white rhino and black rhino are critically endangered.

The IUCN Red List is considered to be the most authoritative source of conservation data with regard to threatened status.

Most of the white survivors are of the southern subspecies. According to the Worldwide Fund for Nature, the only surviving herd of wild northern white rhinos was located in Garamba National Park, a World Heritage Site in the Democratic Republic of the Congo. The four individuals have not been seen since 2006, however, prompting fears that they have fallen to poachers and that the species is now extinct in the wild.

Ziwa Sanctuary is anticipating the arrival of 12 southern white rhinos from a South African park in November 2009, and another group of four East African black rhinos on loan from Kenya is also expected by the end of the year. The black rhinos are needed for breeding purposes and will be returned in due course.

South Africa has seen considerable success with its southern white rhino conservation programme. After fears for the species’ extinction in the late 19th century, one small group of less than 100 individuals was discovered in a KwaZulu-Natal park in 1895,

Since then careful protection and management has caused numbers to soar to such an extent that the southern white rhino is the only non-endangered of the five rhino species. Most are found in South Africa, with smaller populations in neighbouring countries.