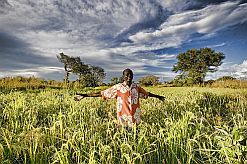 A rice farmer in his field near Lira, Uganda.
(Image: Eyeing Africa, flickr) 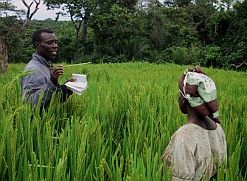 A representative of the Agricultural
Productivity Enhancement Program in
Uganda explains how to care for upland
rice.
(Image: US Department of State) 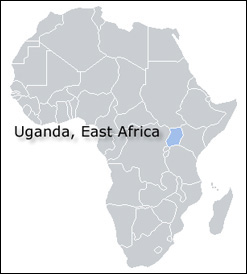 Uganda is to open a world-class research centre for rice. The country received a R56-million ($6-million) grant from Japan, one of the world’s leading rice growers, to establish the facility, which will be based at the Namulonge Crops Research Institute in the southern district of Wakiso.

Research will focus on the New Rice for Africa (Nerica) variety, a crop that showed much potential when it was first introduced in Guinea in 1997 and is increasingly being hailed as a miracle product.

The deal was signed on 22 March 2009 in Kampala by Ugandan finance minister Syda Bbumba and Seki Tetsuo of the Japan International Co-operation Agency. Bbumba, who is also chair of the East African Development Bank‘s governing council, said that the Ugandan government is promoting rice as part of its Plan for Modernisation of Agriculture initiative.

This programme is one of Uganda’s key strategies in the fight against poverty. “Uganda is centrally positioned to produce food for the region, and rice is one of the crops sorely needed,” said Bbumba, adding that agricultural produce as a driver of regional trade would stimulate economic growth.

Rice is a staple crop in much of Africa, but embattled farmers on the continent struggle daily with challenges such as drought, competition with animals, and pests. Nerica has changed their fortunes – according to the United Nations, farmers in African countries where Nerica is currently grown are now achieving plentiful harvests.

Not only are the farmers able to support their families, but there is enough left over to sell in the markets  and earn a profit.

The reason that Nerica grows well in the unforgiving African soil is because it is a hybrid, a cross between the hardy African variety Oryza glaberrima, and the high-yielding Asian variety O. sativa. It exhibits the best features of both – resistance to drought and pests, early maturing, higher yields even when irrigation or fertiliser are lacking, and more protein content than other types of rice.

For his work in helping to develop the hardy strain, Sierra Leonian scientist Dr Monty Jones was a co-recipient of the prestigious World Food Prize in 2004. Jones was also named as one of the world’s 100 most influential people by Time magazine in 2007.

Ugandans consume about 160 000 tons of rice per year. To address this need, the Ugandan government is vigorously promoting upland rice, which is grown in dry soil, as opposed to the traditional method of growing the crop in a flooded paddy field.

The new research facility is expected to increase productivity and improve the quality of rice cultivated in East Africa. Japanese ambassador to Uganda Kato Keiichi said that research into rice was a key sector of co-operation between his country and Uganda.

The Far East country is also investing into areas such as infrastructure development in Uganda. Currently the Japanese government is carrying out a feasibility study on the construction of the Nile Bridge in Jinja and one on the proposed Ayago North hydropower dam.

In 2008 Japan pledged to help Uganda financially to build a bridge over the Nile River at Jinja to replace the 54-year-old bridge at the Owen Falls dam, which has developed serious structural faults and is in imminent danger of collapsing.

Uganda, a land-locked country, relies on the bridge as it connects the south-western part of the country with the eastern and central portions and is vital for trade. The White Nile flows out of Lake Victoria in the south-east and bisects the country as it heads northward to merge with the Blue Nile in Khartoum, Sudan, forming the Nile proper. Uganda’s land-locked neighbours Rwanda and Democratic Republic of Congo also need the bridge as it is the only link to the Kenyan port city of Mombasa.

Japan is also assisting in preparations for the construction of the proposed 500 MW Ayago hydropower project. The development will be situated near Ayago village in the Murchison Falls National Park in the north-west, at the confluence of the Ayago and Victoria Nile Rivers. Installed electricity-generating capacity in Uganda is only 300 MW, and it is estimated that by 2025 the country will need 2 000 MW to run homes and industries.

Other areas of co-operation include the extraction of phosphates fertilisers, the production of biofuel using oil from the Jatropha curcas plant, said to be one of the best candidates for biofuel manufacture, and further infrastructure development in northern Uganda.