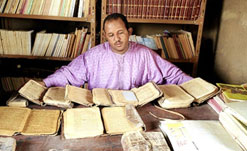 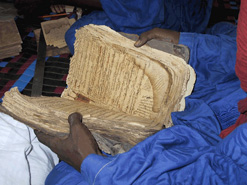 Crumbling and fragile, the priceless
Timbuktu Manuscripts are under intense
scrutiny by expert teams from Mali
and South Africa. (Image: Unesco)

From August 2008 South Africans will get the chance to see a precious piece of African history, when 40 documents from the vast collection of Timbuktu Manuscripts go on exhibition around the country.

South Africa and Mali, one of the world’s poorest countries, are working together to preserve the priceless collection of thousands of documents once held in Timbuktu’s ancient libraries and universities. More than 100 000 manuscripts are still in existence, some dating back to the 13th century.

Once the site of the world’s southernmost Islamic university, Timbuktu is the legendary Malian city that sprang up as an important commercial centre 900 years ago. The city lies on the southern edge of Africa’s vast Sahara desert, where it is subjected to the relentlessness of the climate. While its golden days as a busy caravanserai and a hub of Islamic learning are gone, it still remains in high regard because of its role as guardian of the manuscripts.

The collaboration is a key element of the South Africa-Mali project, initiated personally by South African President Thabo Mbeki in 2002. It is also the flagship cultural project of the New Partnership for Africa’s Development (Nepad).

Minister of Arts and Culture Pallo Jordan opened the Timbuktu script and scholarship exhibition on 7 August 2008, where Mbeki delivered a keynote address.

“This exhibition of a representative selection of manuscripts from the Ahmed Baba Institute is partly a consummation of the process started in 2001, when the governments of Mali and South Africa committed themselves to the preservation of the great written heritage of Timbuktu,” said the president in his address.

“I consider our having this body of materials here to be a great privilege and of historic importance, and is a clear indication of our vision of consolidating historical ties with the rest of the African continent.

“South Africa is also taking the lead in various aspects of the conservation and research on the manuscripts. We are, of course, also nearing completion of a new home for the manuscripts in Timbuktu, which will be a state-of-the art archive.

“While we had always heard of the legendary tradition of learning of that city it was a revelation to lay eyes on such a dense and distinctive range of written materials. As the exhibition travels through major South African cities many of our people will now also be able to see the rich diversity of written materials from Timbuktu.”

While Africa is known for its rich oral history, the exhibition will also help to raise awareness of the continent’s centuries-long association with the written word.

“It is very important for our people to be given the opportunity to view a diversity of manuscripts from Timbuktu,” Jordan said. “Various writing materials and subjects are included, revealing a multifaceted history of reading and writing in Africa.”

Examples from the collection have been seen in South Africa before – in 2005 the Standard Bank Gallery in Johannesburg hosted an exhibition of 16 manuscripts, which included a biography of the Prophet Muhammad and treatises on music, astronomy, physics and traditional pharmacy, as part of a fundraising drive for the project.

The exhibition was opened by Malian President Amadou Toumani Toure. It was the first time the documents, which are now held at the Ahmed Baba Institute of Higher Learning and Islamic Research in Timbuktu, had ever appeared in public. The Ahmed Baba Institute is an institution of learning founded in 1974 with the help of the United Nations Educational, Scientific and Cultural Organisation (Unesco). Ahmed Baba was a famous 15th-century Timbuktu scholar.

“We undertook the Timbuktu Project because we all agreed that the modest facilities of Ahmed Baba Institute and the limited resources available for the preservation of these manuscripts meant that over time most of them would fall into a serious state of disrepair, and many would be lost to the illegal traffic,” said Mbeki on that occasion.

“Clearly, we cannot allow such a critical part of African history to die, because such a death would mean erasing an important link to our glorious past.”

A centre of medieval learning

Timbuktu’s renowned and ancient libraries thrived through a process of copying by hand. Learned travellers passing through the town were asked for permission to copy their books, and scholars came from all over the African and Arab worlds to study the documents, becoming known as Ambassadors of Peace throughout North Africa. During its heyday there were over 25 000 students enrolled at the University of Timbuktu.

Speaking to the BBC, Ahmed Baba Centre archivist Chirfi Alpha Sane said, “In Timbuktu these scholars said that gold came from the south, salt came from the north, money came from the lands of the white men, but they believed that wisdom and the word of God were to be found only in Timbuktu.”

Great care was taken in the production process, resulting in exquisite calligraphy, illuminations and leather bindings. Over the centuries, however, these beautifully-made documents have suffered much physical damage, mainly due to the climate and to insects such as termites. Paper has become brittle in the heat and dryness, while dust, grit, and human handling have also inflicted great damage.

Not only did the city boast a number of well-stocked public libraries, but private libraries contained religious texts, trade contracts, legal decrees, and diplomatic notes. Today there are an estimated 60 to 80 private libraries remaining in the city. The Ahmed Baba Institute holds about 25 000 of the 100 000 surviving manuscripts, while the rest languish in Mali’s private libraries and private collections in Spain, France and Morocco.

The collection has been inscribed as the first in Unesco’s Memory of the World project and Timbuktu itself was named a Unesco World Heritage site in 1998. The city and its residents, once wealthy, are today largely poverty-stricken.

Working together to preserve the past

President Thabo Mbeki made a state visit to Mali in 2001 and was invited by that country’s president at the time, Alpha Konare, to conclude his trip with a visit to the ancient town of Timbuktu. Mbeki had no hesitation in accepting since, as he said, “as a student of African history in years gone by I had read about the significance of Timbuktu in the history of the great Malian and Songhay empires”.

The manuscripts, which were used to teach mathematics, philosophy, chemistry, botany, astronomy, medicine, law, history and other disciplines, were described by Mbeki as among the most important cultural treasures in Africa as they show the advanced extent of African learning and civilisation at a time when Europe was only emerging from the Dark Ages.

Moved by the efforts of Malian officials to care for the documents under the harshest and most basic of conditions, Mbeki realised that there was a need to create conditions conducive to the conservation and study of the artefacts.

The South African government consequently pledged its support for the cause, which led to the signing of an agreement between the two countries, and the establishment of the South Africa-Mali project which was then declared an official South African Presidential Project.

Benefactors from the public and private sectors donated money to build the new Ahmed Baba Centre near Timbuktu’s historic Sankore mosque, one of three mosques at the centre of the 12th century University of Timbuktu. The Sankore Mosque was established in 989 by the highly intellectual chief judge of Timbuktu, Al-Qadi Aqib ibn Mahmud ibn Umar, who was also the dean of Sankore University. The new facility contains an underground library for more efficient preservation of the documents.

As part of the project South Africa also embarked on a training programme for the conservators of the Timbuktu Manuscripts, hosting them for two months in the year over a period of three years. With the support of the National Archives, conservators are being taught how to take care of the ancient tomes. Archivists from South Africa also travelled to Timbuktu to offer advice to families who own documents privately, while academics promoted their study.

Deputy Minister of Arts and Culture Ntombazana Botha said at a ceremony to mark the successful conclusion of the initial programme in 2005, “It is our responsibility to make all South Africans and the people of Africa aware of the cultural, literary, scientific and historical importance of the manuscripts.”

Speaking directly to the graduates, she added, “We are confident that you will fulfil your important responsibilities back home with equal commitment and diligence. Remember that Africa has entrusted you with her greatest treasure – the Timbuktu Manuscripts. Please look after this treasure and handle it with care. You are the pioneers of a new generation of committed African Renaissance conservators and we are extremely proud of you.”