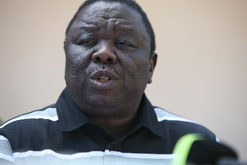 Movement for Democratic Change leader
Margan Tsvangirai at the signing of the
Memorandum of Understanding in Harare
yesterday.
(Image: Irin News)

The signing of a Memorandum of Understanding (MoU) between embattled Zimbabwean president Robert Mugabe and main opposition leader Morgan Tsvangirai has opened the door to talks about the formation of a power-sharing government to resolve the country’s political and economic woes.

Zimbabwe’s two political protagonists signed the MoU at a ceremony in the capital Harare on 21 July, committing themselves to dialogue with each other with a view to creating a sustainable solution to the Zimbabwean situation. Although the talks are a small step in the direction of restoring Zimbabwe, they are significant as the two leaders have been at loggerheads since the since the formation of the Movement for Democratic Change (MDC) 10 years ago, led by Tsvangirai, provided the first real opposition to Mugabe’s ruling Zanu (PF).

After 28 years of rule, Mugabe’s loss to the MDC in the March 2008 election was the first indication that his grip on power was loosening. Despite having lost the presidential election, Mugabe insisted on a run-off election in June 2008. Campaigning was marred by a wave of violence and intimidation targeted at MDC supporters, causing Tsvangirai to withdraw from the election to save lives. The resultant one-horse race was inevitably won by Mugabe, giving him a further five-year term as president.

As outlined in the MoU, talks between the parties will take place during the next two weeks around issues of economics, politics, communication and security.

Ways in which to restore economic stability and growth are high up on the agenda as Zimbabwe has the most battered economy in the world, with inflation at a whopping 2.2-million percent and unemployment at 80%.

Politically, the prospect of a new constitution will also be explored as well as the functions of state organs and institutions. A government of national unity is widely seen as the solution to the crisis by the African Union (AU) and the Southern African Development Community (SADC) and new elections could possibly be discussed. The talks will also focus on promoting equality and restoring unity and encouraging national healing.

Violence has been a distinctive mark of Mugabe’s rule and the way forward in preventing bloodshed and protecting the security of citizens is also on the cards.

South African President Thabo Mbeki, who has been receiving criticism for his quiet stance on the neighbouring country’s politics, facilitated talks between the two parties. SADC appointed him mediator in 2007, and he has long maintained that talks between the two were paramount in resolving Zimbabwe’s problems.

South Africa’s Department of Foreign Affairs said the signing of the MoU “heralds the dawn of a new beginning in the quest for a lasting solution to the country’s political and economic challenges”.

“We are convinced that the Memorandum of Understanding has laid a firm foundation for the Zimbabwean people to start on a new road towards political stability and economic recovery,” said Foreign Affairs spokesperson Ronnie Mamoepa. “We reiterate our view that the signing of the Memorandum of Understanding is a significant and major step forward in the process of dialogue among the Zimbabwean political parties as facilitated by President Thabo Mbeki in his capacity as SADC Facilitator.”

The South African media have hailed the talks with the front-page headline of The Star newspaper calling it “Hope in a handshake”, the Times’s banner headline simply declaring “HOPE”, and Business Day calling it a “New Dawn in Zimbabwe as Mugabe accepts deal”.