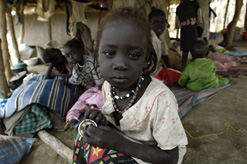 Refugees flee fighting in Sudan in May
2008.
(Image: Irin Photo)

The Sudanese government’s announcement of a ceasefire in Darfur would not alone solve a crisis that has lasted nearly six years and left hundreds of thousands of people dead – but offers a glimmer of hope, analysts say.

On Wednesday 12 November Sudanese President Omar el-Bashir announced an “immediate, unconditional ceasefire” in Darfur. He called for an immediate campaign to disarm militias accused of committing some of the worst atrocities during the conflict.

The pronouncements were among the recommendations of the Sudan People’s Initiative, bringing together government, political opposition parties and civil society to brainstorm solutions to the crisis in the North African country.

Darfur rebels boycotted the forum and one of the most powerful groups, the Justice and Equality Movement (JEM), said it would not accept a ceasefire without a framework of agreement, declaration of principles and a timeframe for ceasefire.

“Without that, we are not interested in any talk that is not going to be substantiated by improvement on the ground,” El-Tahir El-Fak, speaker of JEM’s Legislative Assembly, said.

Observers said the success of the latest ceasefire depended not only on its implementation, but other political steps.

Pagan Amum, secretary-general of the Southern Sudan People’s Liberation Movement (SPLM), a partner in a government of national unity following the 2005 peace deal, said the ceasefire was a good start.

“[But] declarations are not enough. Implementation is what is needed.”

Amum said this ceasefire alone would not be enough to convince the international community to suspend Bashir’s likely indictment by the International Criminal Court (ICC) in The Hague, but rather, “a peace process, giving results and serious commitment”.

While many are sceptical of just how genuine this latest commitment is, others doubt the promises made now will be kept if and when the ICC decides to issue an arrest warrant.

A Western diplomat said the government had to meet a set of criteria in order to seek a deferral of the indictment: faster deployment of the UN-African Union force, Unamid, cessation of hostilities, a better environment for displaced people and humanitarian aid workers, and uninterrupted implementation of the 2005 comprehensive peace agreement.

This ceasefire, if it held, would satisfy only one of those criteria. What is more, the president announced the ceasefire with a caveat – “provided that an effective monitoring mechanism be put into action and be observed by all involved parties”.

“There are no forces that can monitor the ceasefire,” said Foreign Minister Deng Alor of the SPLM, adding that he doubted Unamid had the capacity yet. “The decision to call for a ceasefire is a positive thing, but then it has to be made to work.”

Other Sudan People’s Initiative’s recommendations – all endorsed by the president, who said he would create a special committee to monitor their implementation – included the release of Darfurian political prisoners, individual and collective compensation, and increased police presence in the camps for displaced people.

Darfur rebels said they were disappointed that some key issues were not nailed down, including the release of JEM fighters sentenced to death, making the three states of Darfur a semi-autonomous region, and giving the region a vice-presidential post.

These issues, according to analyst Alex de Waal, were critical for Darfurians, “because they provide those cast-iron guarantees that Darfur’s wishes cannot be overridden by a national political system in which they are a numerical minority”.

Bashir called on the rebels to come to the negotiating table and said he would create a committee charged with wooing them, but De Waal said: “Bashir needs to build a lot of confidence before he can expect the movements to respond positively.”

“The most important reality today is that the denial and self-imposed political paralysis that have marked the Sudanese political establishment’s approach to Darfur have been decisively overcome … There’s a glimmer of hope.”