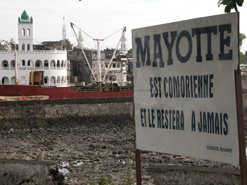 A billboard in Comoros protesting France’s
decision to incorporate Mayotte as a
French overseas department. It reads:
“Mayotte is Comorian and will be forever.”
(Image: Irin Photo)

People in the Comoros have voted for a new constitution that will streamline the Indian Ocean island state’s top-heavy government and extend the current president’s tenure by a further 12 months.

The vote ensures that President Ahmed Abdallah Sambi – who began his four-year term in 2006, but will step down in 2011 – will be the last leader to preside over the complex governance system that costs one of the world’s poorest states about 80% of its gross domestic product.

The 2001 Constitution, known as the Fomboni Accords, was specifically tailored to put an end to the cycles of violence that had earned Comoros, which consists of three islands, the nickname of “the coup-coup islands”, after more than 20 coups and secession attempts since it gained independence from France in 1975.

The most recent secession attempt, on the island of Anjouan, was put down by African Union soldiers in 2008.

Under the 2001 constitution, the electoral system provided for a semi-autonomous government and president for each of the three islands – Grand Comore, Moheli and Anjouan – with a rotating presidency for the overarching union government.

Each island had a separate president, parliament, and many other prerogatives, making few resources available for poverty alleviation, health and education.

Despite calls by opposition parties to boycott the referendum on 16 May 2009, claiming it would be a first step towards one-party rule, 52.7% of eligible voters cast their ballots and endorsed the constitutional reforms with a majority of 93.8%, according to Abdoulrahim Said Bacar, spokesperson for the union government.

Said Bacar said “within a few weeks” the federal island presidents would become governors, and ministers would become councillors, shaving 10% to 15% off annual government expenditure. The reforms would also empower Sambi to dissolve parliament.

Moheli is the only island not to have had a union president under the 2001 constitution. Sambi is a native of Anjouan and his predecessor, Azali Assoumani, was from Grande Comore.

A fourth island in the archipelago, Mayotte, chose to remain under French administration in 1975 and recently voted to become a department of France, despite objections by the Comoros and African Union.

The status of a department will give Mayotte’s citizens the same rights and social benefits as those enjoyed by the citizens of mainland France.