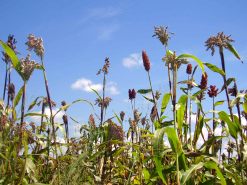 Sorghum is one of Africa’s staple foods,
and may have been sustaining the
continent’s people for longer than
initially thought.
(Image: Wikimedia)

New research suggests that early humans in Africa may have consumed grains and cereals much earlier than was previously thought – in fact, over 100 000 years ago.

The generally accepted idea is that our Homo sapiens ancestors existed on meat, nuts, fruit, roots and vegetables, with cereals entering the picture a mere 20 000 years ago.

This is because the preparation of cereal in order to make it palatable takes special techniques and skill, including roasting over high heat, or grinding into flour prior to baking.

To date scientists have associated cereal consumption with the introduction of farming some 10 000 years ago, although in 2004 ancient barley and wheat grain residue was found on a 22 000-year-old grinding stone at the Upper Palaeolithic site of Ohalo II on the southwest shore of the Sea of Galilee in Israel. At the time the grains represented the oldest known sign of food processing.

Sorghum, a staple food in many African countries and other developing nations, has now been found amongst 100 000-year-old tools in the Ngalue cave, situated along the shores of Lake Malawi in Mozambique. The grain, which originated in Egypt, is actually a genus of various species of grass, and is used in flours, breads, porridges and alcoholic beverages.

The discovery was made by Julio Mercader, holder of the Canada Research Chair in Tropical Archaeology at Calgary University’s Department of Archaeology.

Mercader revealed his findings during December 2009 in leading peer-reviewed research journal Science, a 130-year-old publication of the American Association for the Advancement of Science. The article was titled Mozambican Grass Seed Consumption during the Middle Stone Age.

Mercader and his colleagues, including scientists from Mozambique and South Africa, recently found various stone tools in a layer of sediment that built up in the limestone cave between 42 000 and 105 000 years ago, across a 60 000-year-long span of human habitation. Although the tools have not been dated, it is likely that the oldest ones, those buried deepest, match the age of the layer itself.

Ngalue’s sedimentary layer, wrote Mercader, has five sections. The team focused on the so-called Middle Beds, which hold evidence of a Middle Stone Age industry with tools, animal bones and plant remains. The cave lies along the ancient route of modern human dispersal through Africa and could prove important in gaining more understanding of human habits of the time.

Initially the team were looking for tuber remains, since the fleshy roots were an important part of the Stone Age diet. The starch residue found on the 70 tools analysed showed that the Stone Age kitchen contained the African wine palm and false banana or ensete – an important root crop – as well as pigeon peas, wild oranges, and the medicinal African potato, which is a corm rather than a tuber.

However, almost 90% of the residue came from sorghum. While the findings don’t conclusively prove that the people of the time ate sorghum, Mercader argues that it had to be used for something specific, as people deliberately brought it into their dwellings. The simplest and most logical explanation is that it was a food item.

“This happened during the Middle Stone Age,” he said, “a time when the collecting of wild grains has conventionally been perceived as an irrelevant activity and not as important as that of roots, fruit and nuts.”

Starch use an evolutionary turning point

Mercader’s discovery has led to some discussion among other experts, who claim that because the sorghum residue was found on tools such as drills, which are not used in the preparation of food, it could just as easily have been used as bedding or kindling.

They do agree, however, that the study is interesting because it shows that early humans relied on more from the plant kingdom than just roots and tubers as they went about their daily lives.

The consumption of starch is thought to represent a crucial step in human evolution, because through its use the quality of the early human diet improved significantly.

“The inclusion of cereals in our diet is considered an important step in human evolution,” said Mercader, “because of the technical complexity and the culinary manipulation required to turn grains into staples.”