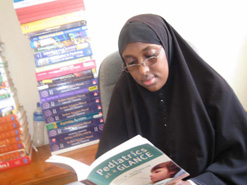 Twelve men and eight women completed their studies at the Benadir University Medical College (BUMC) and are now working at various hospitals in Mogadishu, said Mohamed Mahamud Bidey, dean of the college.

This is the first time since 1990 that doctors have graduated from a Somali institution such as the BUMC.

“There is an acute shortage of doctors in the country and this new crop will help the health system,” Bidey said.

No new Somali doctors have entered the profession since 1990. At the same time, “former doctors left the country, got old or simply died”, he said.

“Before the civil war, our university [Somali National University] used to have 50 medical graduates a year.

“We expect to see 24 doctors graduate next year.” He added that this number would have been greater but many students dropped out because they could not pay the fees.

The college is funded by donations from Somali physicians and an annual fee of US$1 500 (R15 000) per student.

Mohamed Adan Shahiid, one of the lecturers, said the BUMC had collaboration agreements with several foreign universities, including Universita Degli Studi G’Annunzio Di Scieti in Italy, Jazira University in Sudan and Ismailia University in Egypt.

These institutions had pledged to assist in “curriculum development, books, distance-learning, training and equipment”, he said.

According to Shahiid, BUMC is staffed by Somali doctors based both inside and outside the country. “We have two Somali professors from the diaspora who are teaching. Others come and go as time allows them.”

Fadumo Abdulkadir Hassan, 24, one of the new graduates, said she had been assigned to the Benadir Hospital’s pediatric section for her internship.

Hassan said it was a difficult learning environment for students and teachers “but we are very happy to be here”.

“There were times when we could not get to the college. Other times we could not leave and had to spend the night inside the college because it was too dangerous to leave.”

She said she was as committed to the course as her instructors. “We cannot all leave. Who will take care of the people?”

Yahya Abdulakdir, another graduate, said that despite the difficulties they faced, “all of us are happy and overjoyed. Without the dedication of our professors who braved all sorts of problems we would never have been here.”

Shahiid said the university’s most pressing needs were a library and teaching material and space, and training for both the teaching staff and the graduates.

He said so far the UN World Health Organization had helped in providing some training and appealed to agencies, Somalis in the diaspora and well-wishers to “do anything they can to help the university. With the right help we can produce the next generation of medical staff for Somalia, despite the difficulties.

“Together we can make a difference.”