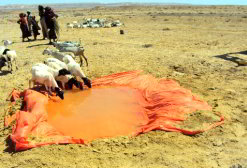 Somalian people and animals are
suffering in the worst drought in the
region in many years.
(Image: Gift of the Givers)

South African disaster relief organisation Gift of the Givers is answering the call to help some of the millions of people starving in Somalia, where the UN has declared a famine amidst the Horn of Africa’s worst drought in decades.

Gift of the Givers has R5-million (US$733 000) worth of high energy nutrition packs and water on standby, the organisation said on its website, and is “already preparing medical teams to be dispatched to Somalia. Logistical arrangements are under way and flight arrangements are at an advanced stage.”

The generosity of South Africans, added the organisation, has meant that four flights will carry supplies and personnel to the drought-stricken country, instead of the one that was originally planned. The first two flights departed on 31 July, the third on 4 August, and the last one takes off on 8 August.

The International Marketing Council of South Africa has added its voice of support to the campaign, and in a statement has urged all South Africans to contribute if possible, thereby playing their part to help their fellow Africans.

People wishing to contribute can go to the Gift of the Givers website for information on how to help. Other companies have also set up donation structures, such as Vodacom with its Relief for Somalia SMS donation facility.

Every day’s delay ‘a matter of life or death’

The UN says that in the two regions of Southern Bakool and Lower Shabelle in Somalia, acute malnutrition rates are above 30%, with deaths among children under the age of five exceeding six per 10 000 a day in some areas.

In the last few months, tens of thousands of Somalis, the majority of them children, have died as a result of causes related to malnutrition.

“Every day of delay in assistance is literally a matter of life or death for children and their families in the famine-affected areas,” Mark Bowden, the UN’s humanitarian coordinator for Somalia, said on Wednesday.

Bowden warned that malnutrition rates in Somalia are currently the highest in the world, with peaks of 50% in certain areas of the country’s south.

Consecutive droughts have affected the country in the last few years, while the ongoing conflict has made it extremely difficult for agencies to operate and access communities in the south. Nearly half of the Somali population – 3.7-million people – is now estimated to be in crisis, with approximately 2.8-million of them in the south.

It is the first time since 1991-92 that the UN has declared famine in a part of Somalia.

Famine is declared when acute malnutrition rates among children exceed 30%, more than two people per every 10 000 die per day, and people are not able to access food and other basic necessities, according to the UN Office for the Coordination of Humanitarian Affairs.

Speaking to reporters in New York, UN Secretary-General Ban Ki-moon stressed that humanitarian agencies needed urgent funding to save lives, adding that roughly $300-million ($44-million) was needed in the next two months to provide an adequate response to famine-affected areas.

“We need donor support to address current needs and prevent a further deterioration of the crisis,” he said, after addressing the Security Council on the impact of climate change on international peace and security.

“If funding is not made available for humanitarian interventions now, the famine is likely to continue and spread.”

Bowden said that without immediate action, the famine would spread to all eight regions of southern Somalia within two months due to poor harvests and infectious disease outbreaks.

“We still do not have all the resources for food, clean water, shelter and health services to save the lives of hundreds of thousands of Somalis in desperate need,” he added.

While UN humanitarian agencies have welcomed the recent statement by the insurgent group, Al-Shabaab, requesting international assistance in southern Somalia, the inability of food agencies to work in the region since early 2010 has prevented the UN from reaching the very hungry – especially children – and has contributed to the current crisis.

UN agencies have asked for $1.6-billion ($235-million) to pay for essential programmes in the Horn of Africa, but have only received half that amount. Kenya, Somalia, Ethiopia and Djibouti are all facing a crisis that is being called the worst in 50 years, leaving an estimated 11-million people in need of humanitarian assistance.