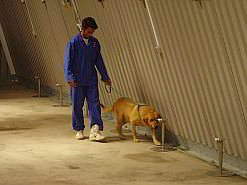 A dog is trained under Mechem’s Explosives
and Drug Detection System at a facility
in Afghanistan. 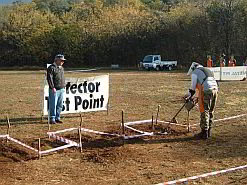 South African-trained sniffer dogs have uncovered a major drug smuggling ring in the west African country of Benin. The dogs alerted their handlers, who discovered 7kg of heroin hidden inside a consignment of aircraft parts.

The parts and bolts had to be taken apart and sawed open to reveal the heroin. The dogs were trained by Mechem, a subsidiary of Denel, South Africa’s arms manufacturer.

Ashley Williams, Mechem’s chief executive, said: “Mechem has a contract to provide 40 sniffer dogs and train dog handlers for the government of Benin. The dogs are deployed at ports and airfields to counter the growing trade of drugs and illicit substances in the region.”

The company landed the contract after Thomas Boni Yayi, the president of Benin, visited the Mechem training facility in Lyttleton, in Pretoria, in 2011 and was impressed by the extraordinary skills of the dogs and their handlers.

Yayi identified drug trafficking as one of the most pressing challenges facing the African continent when he was elected the president of the African Union in January 2012.

How the dogs detect contraband

Mechem has developed a unique system that combines modern technology with the canines’ abilities to search for and uncover smuggled substances.

Known as the Mechem Explosives and Drug Detection System, it involves collecting air samples from suspected containers and vehicles, and taking them to the dogs in a controlled environment.

By sniffing the air samples, the trained dogs are able to confirm if there indeed is any contraband. From this evidence, investigators then physically inspect the scenes.

This technology was used successfully by the South African Defence Force between 1975 and 1988; over the past decade it has been developed further. It is now accredited by the United Nations for use in landmine reduction, according to Mechem’s website.

Williams said: “The value of detection dogs in the war on drugs was again confirmed. The contraband was well hidden inside metal parts and would not have been uncovered by physical inspection.”

This system is used to find drugs and other smuggled contraband such as rhino horn, ivory and abalone.

Mechem is also involved in the fight against rhino poaching, and has placed its resources at the disposal of anti-poaching initiatives.

Talib Sadik, Denel’s chief executive, said: “We have some of the most sophisticated technology in the world and at least three of our business entities can help stop rhino poaching – Mechem, for their sniffer dogs; Carl Zeiss Optronics, for its powerful ‘eye-in-the-sky’ technology; and Denel Dynamics, for their unmanned aerial vehicles.”

Mechem supplies dogs to private game reserves and other entities, according to Dr Hannes Slabbert, the veterinary ethnologist at the company’s training facility. Slabbert said: “We are very proud of our track record, our training and expertise in the field.”

Rhino poaching is rife in Southern Africa. Already this year, 52 animals have been killed for their precious horns in South Africa, according to SANParks. The agency, South African National Parks or SANParks, manages a system of national parks that represents the indigenous fauna, flora, landscapes and cultural heritage of the country.

Eye in the sky

Carl Zeiss Optronics was one of the first companies in the defence industry to launch an aircraft especially designed for day and night operations in border control, nature conservation and anti-poaching operations.

The aircraft is a Pacific Aerospace P-750 XSTOL fitted with a LEO-II or LEO-III airborne stabilised observation system and other equipment that enables recording of real-time, live streaming video.

It has a short take-off and landing ability, while its low-speed gliding capabilities enable it to cover vast areas, economically. In this way, it provides excellent airborne video footage of poachers.

“The aircraft will not easily alert poachers to its presence and its observation mission,” said Albert du Toit, the executive manager of marketing and sales at Carl Zeiss Optronics.