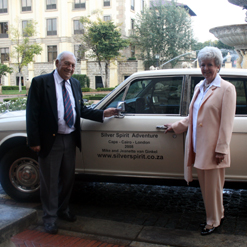 Mike and Jeanette van Ginkel with the
1981 Rolls Royce that will take them
across Africa from Cape Town to Cairo,
and on to London.

All Jeanette and Mike van Ginkel want to do is visit their friends in London. With a lifetime’s experience in aviation one would think the couple would take the obvious way, but not this daring duo – they’re driving there in a 1981 Rolls Royce.

The idea was born one day as the couple were having lunch. “It went something like this,” explains 71-year-old Jeanette, “Let’s drive to Botswana. Why stop in Botswana, let’s see if we can go to Kenya. Actually, let’s go from Cape to Cairo and then to London.”

Their journey began on Sunday 30 March, and 52 days and 15 000km later they expect to reach the port of Alexander in Egypt where the vehicle will be ferried to London.

With only 100 000km on the clock the car still has a lot of life left in it. Add to that the fact that the couple have taken such good care of the vehicle since they got it in 2007 that they achieved the highest ever score of 96.5 percent in the Concourse d’Elegance – an international competition that judges the elegance of automobiles – and its seems plausible that the car can make it that far.

A backup team comprising a medic, a mechanic and a documentary filmmaker will also accompany the couple in an Isuzu 4×4 vehicle that is equipped with the latest satellite tracking and communication devices. The team will navigate their way through Botswana, Zambia, Tanzania, Kenya, Ethiopia and Sudan before they put the brakes on their journey.

Modifications to the vehicle for the trip include treating the windows and coating the car with a protective film to ensure minimal damage from the elements such as heat and rain. The couple also purchased a new Rolls Royce specifically for its parts, the most essential of which will be carried by the accompanying vehicle. In the event of any other parts being required along the journey, they will have to be couriered to the adventurers.

Driving will be shared among the two, but the spots that are difficult to navigate will be negotiated by well-known adventurer Roger Pearce who has already done this trip as well as several other extended journeys like London to Cape Town in 1990, London to Sydney in 1993 and single-handedly driving from South Africa to Silverton UK in 2004.

The couple are both successful business people with Mike spending his entire working career as a pilot, clocking 27 000 hours of flying in over 100 different aircraft, and Jeanette pioneering hot air ballooning in the country.

The vehicle was put to the test in February this year, making it over Africa’s highest pass with no hassle. The Sani Pass, which climbs from KwaZulu-Natal to the mountain kingdom of Lesotho and lies 3 200m above sea level, is usually only accessible by 4×4 unless special permission is granted.

“I can’t wait to see out friends,” says Jeanette. “They are all so old now and we can’t expect them to come to us. Besides, I also want them to see the Rolls.”