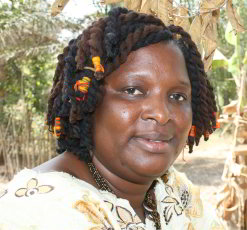 Marie Jalloh, MP for Bombali district and
one of 17 female MPs, believes there is
hope for a more balanced gender
representation in the country’s Parliament.
(Image: Anna Jefferys, Irin Photo)

When Marie Jalloh first ran for office in 2007, resistance to women in politics in Sierra Leone was so strong she faced harassment and intimidation from local authorities.

Now, not only is she a member of Parliament, but she and other women, along with local NGOs, have brought the country closer to a legal quota for women in decision-making posts.

Jalloh is a founding member of the All Political Parties Women’s Association (Appwa), a platform for women across different parties who collaborate to boost women’s participation in politics.

“They tend to be more focused on nation building – building the home, communities and country through availability of schools, health facilities, safe drinking water, etc.”

Bangura added: “Failing to eliminate gender inequality in governance has and will continue to have long-term consequences on the development of the country.”

She said that the barring of women from the decision-making process does nothing to alleviate problems such as extreme poverty, ill health, less education, sexual and gender-based violence, which many Sierra Leonian women face.

A draft bill to be voted on in October, ahead of the 2012 presidential and legislative elections, would require that women hold 14 seats in Parliament and four places among the 12 paramount chiefs.

Furthermore, they should make up 20% of candidates fielded by a political party.

In the 2007 elections, female candidates won just 17 out of 112 elected seats, and were not awarded any of the seats allocated to paramount chiefs.

Jalloh said she was confident the bill, drafted by NGOs, had the support needed to pass in October.

“We lobbied men to support the enactment of this bill,” she said, adding that a men’s group, backing the move, had formed. “We are beginning to see male politicians support women in key positions.”

It is not just men who opposed women entering politics, but culture and tradition have meant many women did not see it as their place, said Nabeela Tunis, who has supported Appwa since 2008 through the UN Integrated Peacebuilding Mission in Sierra Leone.

“Women had problems with confidence,” she said, adding that Appwa has worked to help women see themselves as potential political candidates.

Inatorma Coomber, a women’s rights project coordinator with Oxfam in Sierra Leone, described President Ernest Bai Koroma’s recent statement of support for the bill as cause for optimism.

Speaking in June, Koroma praised Appwa for its future role as an advocate of women in influential positions of trust in the country.

“My desire and commitment is to see 30% women in Parliament and local councils,” said Koroma, asking leaders of all political parties to support Appwa.

However, Coomber noted that support was not universal in Sierra Leone. “There are still areas where people believe women should not take leadership positions.”

Appwa members are lobbying for the bill within their own parties and “to make sure women who are strong candidates are put forward,” Tunis said.

Whether or not a legal quota passes, change is already apparent.

“Women now face less harassment and intimidation,” said Jalloh, adding she has not personally faced any since the events of 2007. “Women in the past were victims of political violence but since the inception of Appwa this has changed.”

Oxfam currently runs programmes in two districts, Kailahun in the east and Koinadugu – the country’s largest district – in the north. Here the organisation supports women representatives on local councils through training in delivering good government services.

Getting women into political positions is a multi-faceted process, said Coomber. “You don’t just get women into politics, you give them the tools and build up their capacity so they can deliver and serve as a good example.”

“We show them the benefits of empowering the opposite sex,” Coomber said. “If half your population are not empowered it is harder for all.”

The Sierra Leone Truth and Reconciliation Commission’s final report, published in 2004, pointed to the need to boost the role of women in politics: “The institutions and processes of peace, security and development, as well as societies at large, are made stronger and more effective by the full and equal participation of women.”

The report recommended that 30% of candidates put forward for all public elections be women, and that the 2014 target should be a 50-50 gender balance in representative politics.