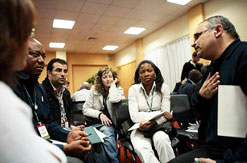 Budding science journalists in Africa are
to gain from the knowledge and
experience of their mentors.
(Image: SjCOOP)

Science journalists in Africa and the Middle East are to benefit from an ongoing mentoring programme set up by the World Federation of Science Journalists with the support of the UK’s Department for International Development.

Assisting with implementation will be the Development Communications Network, an NGO located in Lagos, Nigeria.

The second phase of SjCOOP, or the Science Journalism Cooperation, was officially launched at the end of February 2010 by Egyptian journalist Nadia El-Awady, president of the Quebec-based World Federation of Science Journalists (WFSJ).

El-Awady is a veteran in the field – she is also president of the Arab Science Journalists Association, and has worked both as a full-time and freelance science journalist, and editor.

The World Federation of Science Journalists represents 41 science journalist associations in Africa, the Americas, the Asia-Pacific, Europe and the Middle East.

Its aim is promote science journalism as a means of greater interaction between science and the scientific community, the media, and the public.

It will strive to equip 60 young journalists from 30 countries with the skills to proficiently report on complex issues that are relevant to Africa and the Middle East, such as health, the environment, agriculture, research, and science and technology. Another 15 participants will learn to be trainers themselves.

The project also plans to establish another 10 science journalism associations to support the 60 mentees and their 16 mentors. Training is carried out mainly by distance, through the WFSJ website, email, Skype and telephone. However, the trainees and their mentors do meet face to face at least once a year.

Latin America and Asia are to get their own SjCOOP programme soon.

Interested journalists can watch out for announcements on the WFSJ website. Potential mentors are also invited to apply.

As with the first stage, which was the flagship project of the WFSJ from 2009 to 2009, the second stage of SjCOOP runs for three years.

The programme aimed ultimately to raise the profile of the genre on the continent and boost its ranks of competent science reporters. In its final report, published in May 2009, it claimed to have succeeded.

Even better, said the SjCOOP report, a number of graduates received promotions as a direct result of their new skills, and 22 of them have walked off with 44 prizes for their articles – this includes five prestigious scholarships from MIT and Canada’s International Developmental Research Centre.

Furthermore, a number of new science journalism associations have sprung up in Cameroon, Ghana, Rwanda, South Africa, Sudan, Uganda and the Arab World. A handful of others are in the process of being drawn up, and another eight have twinned with associations in the developed world. Two ailing associations in Kenya and Nigeria have also been revived.

Previously there was little cooperation between Western science journalists and their peers from emerging nations, but the SjCOOP initiative has given African journalists the confidence to interact with colleagues from overseas on a knowledgeable and professional level.

So now, with proof of the success of the project, the more ambitious and demanding second phase is about to get underway.

“The first SjCOOP had a major positive influence on science journalism in Africa and the Arab World in the past three years”, said El-Awady. “This second phase is much more ambitious. We will provide journalists with an opportunity to achieve the best a science journalist can hope for: make a difference in the life of people.”

She added that the WFSJ hopes to repeat the success of the first course, and to continue to improve the quality of science reporting.