Singing in English, isiZulu and French, globally renowned African musicians Salif Keita of Mali and South Africa’s Ladysmith Black Mambazo have released a new single calling for peace on the continent, an end to xenophobia and a united Africa.

Singing in English, isiZulu and French, globally renowned African musicians Salif Keita of Mali and South Africa’s Ladysmith Black Mambazo have released a new single calling for peace on the continent, an end to xenophobia and a united Africa.

The collaboration United We Stand, released on Friday 1 May, comes as a response to the xenophobic attacks in KwaZulu-Natal and Gauteng last month that left seven people dead and thousands of foreigners from elsewhere in Africa displaced from their homes.

“We want Africa united,” Keita said at the recording a few days before. “We always think that South Africa is a very good place for peace, for everybody in the world, everybody in Africa. We love it here. We won’t give space to xenophobia. No, we want to live here like our home.”

Known as “the golden voice of Africa”, Keita is one of the most successful exports from the rich West African music tradition, becoming hugely successful on global World Music charts. As an albino he has personal experience of prejudice, and spent much of career campaigning for tolerance of difference.

Watch the video of United We Stand:

The Grammy award-winning Ladysmith Black Mambazo are one of South Africa’s oldest and most prolific music groups, singing in the traditional choral styles of isicathamiya and mbube. Formed by Joseph Shabalala in 1960, over the years they have won four Grammy Awards and collaborated with the likes of Paul Simon and Josh Groban.

“This song is very powerful because it’s talking about culture,” Shabalala said at the recording of United We Stand. “How to stay together. How to love one another.”

Keita told the Sunday Times he had wanted to collaborate with Black Mambazo for a while. The singer-songwriter has worked with Weather Report founders Joe Zawinul and Wayne Shorter, drummer Paco Sery, guitarist Carlos Santana, and percussionist Bill Summers.

Salif Keita in a still from the video. The Malian musician’s 2009 album La Différence is dedicated to the struggle of the world albino community.

“We are in the same boat, fighting this struggle together,” he told the newspaper. “I am very pleased to be here to be making the song together. We are going to continue this fight for love and unity in Africa to the end.”

Shabalala said the power of music could help break down the barriers between Africans.

“Music is a good way to reach millions of people,” he said. “This will send out a strong message for peace. The song talks about love and respect. We hope it will encourage this.” 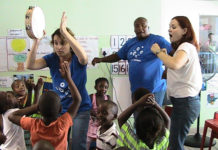 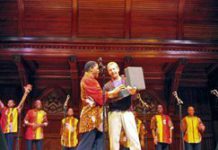