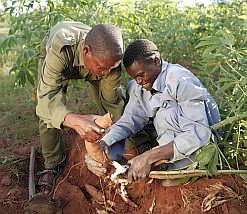 Farmers ready the tuber-like cassava root
to be processed.

Impala Lager will solely be sold in
Mozambique and depending on its
success there, will be sold in other
African countries.
(Images: SABMiller)

SABMiller’s large-scale production of cassava beer in Mozambique is promising multiple spinoffs: it will be far safer to drink than potentially lethal home-brewed versions and small-scale farmers will benefit from growing the raw product and supplying it to the beverage giant.

Cassava is a shrubby, tropical plant that produces hardy, potato-like tuber roots, which can be used to make beer.

Mark Bowman, MD of SABMiller Africa, said: “We estimate that the volume of the informal, unregulated alcohol market across Africa could be up to four times that of the formal market. By using locally sourced raw materials, we are able to create high-quality, affordable products for consumers who would otherwise be drinking informal or illicit alcohol.”

Bowman added that the private sector had the responsibility to exploit Africa’s enormous agricultural potential by creating opportunities for subsistence farmers in the value chain.

According to the UN’s Food and Agricultural Organisation (FAO), 46% of Mozambique’s land is arable, but only 14% is utilised.

The production of Impala beer is also part of SABMiller’s Farming Better Futures initiative, which promotes the sourcing of raw materials from local subsistence farmers in the countries where it operates.

The initiative has been implemented in Uganda, Tanzania, South Sudan and Zambia.

In recognition of the long term socio-economic benefits of the new product, the Mozambiquan government has reduced the excise tax on it to make it more affordable.

The launch of the cassava beer follows on from the successful introduction of Eagle, a sorghum beer, in Uganda.

Eagle is now the most popular SABMiller product in that country.

Straight from the source

Impala will be produced at the brewer’s Mozambique subsidiary, Cervejas de Moçambique (CDM).

The lager will constitute 70% cassava and 30% barley, while having a 6.5% alcohol content – higher than most commercial beers.

Due to cassava’s fragility, quick degradation and high water content – which make it ill-suited to long-haul transport – SABMiller has partnered with the Dutch Agricultural Development and Trading Company (Dadtco) to process the raw material on site.

Dadtco has a mobile unit able to travel to cassava-farming regions and process the root, which enables the integrity of the starch to be preserved.

Peter Bolt, MD of Dadtco, said: “The rural regions we are targeting are extremely poor and the farmers have previously struggled to sell more than a bag of cassava every two weeks.

“By creating a sustainable, vibrant market for their crops, buying from them direct and helping them to improve their yields, there is no doubt that this project will have a significant impact on their lives and the local economy.”

The farming of cassava in Mozambique constitutes over 6% of the country’s GDP, according to the FAO.

Nearly 40 000 tons of cassava will be used in the production of Impala every year, giving an income to over 1 500 subsistence farmers and their families.

FAO figures indicate that 80% of the most vulnerable people in Mozambique live in rural areas and survive through subsistence farming, so the new venture will have far-reaching benefits.

Bowman added: “We have more to do to expand our partnerships with Africa’s farmers and we are committed to increasing local raw material sourcing in Africa to 50% over the next two years.”