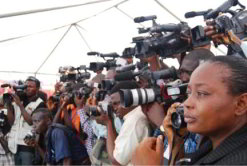 East African journalists will compete for
the David Astor Trust prize, which brings
a huge boost to the winners’ careers.
(Image: VibeGhana)

South African brewing giant SABMiller has announced it will be a co-sponsor of the 2011 David Astor Journalism Awards Trust. The award programme is aimed at boosting the standard of independent journalism in East Africa, and is about to select a fourth group of winners.

In 2008 former president Nelson Mandela endorsed the innovative programme, saying that it was a fitting way to honour the late newspaper editor, who headed the Observer newspaper for 27 years and was a staunch supporter of the African National Congress during South Africa’s struggle years.

Despite being wealthy, Astor was a champion of human rights – especially the oppression of black Africans – and invested a portion of his fortune as well as Observer profits into charitable causes.

Established in 2006, the London-based trust works in Kenya, Uganda and Tanzania to strengthen and support independent journalism in the region by investing in the careers of up-and-coming young journalists at an early stage.

As the print media is still considered an enormously influential medium, it is important that those practising in the industry work to the highest standards, are committed to their profession, and aspire to uplifting their local communities through their work.

SABMiller Africa’s MD Mark Bowman said that good governance and the rise of democracy in Africa is bolstered by a thriving independent media.

“It can be a crucial bulwark to defending human rights and in contributing to the socio-political development of the region,” he said, adding that the company is proud to be associated with the David Astor Trust, as the awards programme’s legacy will be positive and lasting.

Each year the trust selects one winner working in the English print sector in each country, and sends the group on a three-month professional development course tailored to their individual circumstances and areas of focus.

This involves a practical stint at newspapers in the UK and South Africa, where they work alongside seasoned journalists. Afterwards they have access to the awards’ support and mentoring network of media professionals and organisations for the duration of their careers. Top winners also take home a cash prize of US$500 (R3 440), with runners-up receiving $250 (R1 720).

Although the money is modest, the opportunities are vast. To date there have been nine award winners, who are expected to play leading roles in the emergence of the next generation of journalists in East Africa, and embody the principles of integrity of the man in whose name the award was established.

As the network grows, annual meetings will rotate between the three countries, giving winners a chance to meet their peers, establish relationships, and collectively further the aims of the trust.

Cream of the crop

The rigorous judging and evaluation process takes about nine months from the receipt of nominations to the final judging phase.

The three 2010 winners were selected from nine finalists, out of an original pool of 35 nominees put forward by news houses, journalism lecturers, editors and related associations in the three countries.

Newspapers involved in the programme include the Times, Independent, Guardian, Observer and Financial Times in the UK, and the Mail & Guardian and Sunday Times in South Africa.