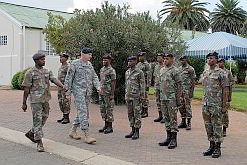 The South African National Defence Force
will be providing extra security in South
Sudan during the celebrations which mark
the country’s formal declaration of
independence.
(Image: flickr)

South African soldiers have arrived in Juba, South Sudan’s capital, to help with setting up tight security measures ahead of the 9 July celebrations which mark the country’s formal declaration of independence.

On 6 July the Southern Sudan Legislative Assembly passed the Transitional Constitution of South Sudan, on which the new nation will be founded.

At least 30 African heads of state, foreign ministers, and leaders of regional and multilateral organisations are expected to witness the historical birth of Africa’s 54th nation.

President Jacob Zuma is leading a South African delegation, which is said to be the largest that will be present at the declaration ceremony, to Juba.  The party includes former president Thabo Mbeki, Minister of International Relations and Cooperation Maite Nkoana-Mashabane, presidential special envoy to Sudan Charles Nqakula, and a number of other cabinet ministers.

The South African National Defence Force (SANDF) is to assist with providing extra security in Juba, and securing South Sudan’s airspace, during the celebrations. The SANDF will also assist with the accreditation of dignitaries.

Although the presence of the SANDF in Juba was initially to provide security to just the South African delegation, it was felt that the best way to protect the local contingent was by securing the entire celebration.

Barnaba Benjamin Marial, South Sudan’s minister of information and broadcasting, said that over 3 500 representatives are expected to attend the festivities. They include kings, chiefs and elders from across the 10 states of the independent region, as well as leaders from the business community, civil society, and women and youth movements.

“It will be a historic occasion for all our people who have travelled a long and difficult road to the birth of this nation,” he said, adding that while there may be challenges ahead, the South Sudanese nation would “face them as united, peaceful, and independent, and build a stable and prosperous country.”

To commemorate the birthday of the Republic of South Sudan, as it will be known, Marial said bells and drums would sound at midnight on 8 July, the eve of independence.

The birth of the Republic of South Sudan

In January 2005, the Sudan People’s Liberation Movement and the Sudanese government – represented by the National Congress Party – struck a peace agreement to end Africa’s longest-running civil war. About 2-million people have lost their lives over the years.

In January, this year a referendum took place in Southern Sudan to give citizens a say in whether the region should remain a part of Sudan or become independent. In February the referendum commission revealed a result overwhelmingly in favour of independence.

According to the programme for the day, Sudan’s president Omar Hassan Al-Bashir and the UN secretary-general Ban Ki-moon will be key speakers at the event.

James Wani Igga, the speaker of South Sudan’s Legislative Assembly, will proclaim the independence of the new nation, after which President Salva Kirr will sign the new transitional constitution.

Kirr will then lead the lowering of the flag of Sudan and the raising of the new flag of the Republic of South Sudan. He will then take the oath of office as the country’s first president.