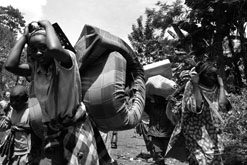 Thousands of people have been left
displaced by the ongoing violence in
eastern DRC. 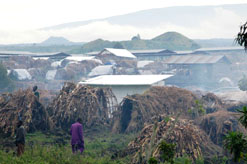 Refugees have built makeshift homes
in the bushes as unguarded refugee camps
are deemed too dangerous.
(Images: Doctors Without Borders)

In the wake of the ongoing violence sweeping the eastern region of the Democratic Republic of Congo (DRC), South African President Kgalema Motlanthe has called for an immediate ceasefire to allow much-needed humanitarian aid to reach hundreds of thousands of displaced people.

Motlanthe made the call at an extraordinary Southern African Development Community (SADC) summit, held on 9 November to discuss the crises in both the DRC and Zimbabwe.

“The purpose of this summit is to discuss the instability and humanitarian crisis unfolding in the eastern part of the DRC,” he said. “We remain ready to assist the people of the DRC …to achieve a lasting peace.”

Dissident Tutsi general Laurent Nkunda, rebel groups and Congolese government soldiers and their allies have been engaged in sporadic fighting in various parts of North Kivu, which borders Rwanda.

Over 253 000 people have been displaced by the fighting.

All efforts are being made to avoid another civil war similar to the one that ravaged the region between 1998 and 2003.

The fighting has also taken on regional dimension with Rwanda, which has twice invaded Congo, accused of aiding Nkunda.

The government of the DRC has in the meantime called on Angola, which backed it during the war, for help.

It’s believed that Angola might have heeded this call, as soldiers described as “disciplined and Portuguese speaking” have been spotted in North Kivu.

In early November, general Nkunda’s powerful army defeated the national army, which has been described as weak and chaotic, during an open-fire battle.

Speaking at the SADC summit, President Motlanthe said he was pleased to hear of diplomatic engagements between the government of the DRC and Rwanda.

The Rwandan government has since vehemently denied that any of its nationals are involved in the unrest.

Ban Ki-moon stressed that neither the vast African nation nor the surrounding region can risk a return to such conflict.

“I must begin by saying that I have come to Nairobi with a heavy heart. We meet today as, once again, the interlinked tensions and conflicts in the Great Lakes region threaten hard won progress.”

The Nairobi summit, hosted by the African Union, brought together DRC President Joseph Kabila and President Paul Kagame of Rwanda.

Tutsi rebels are said to be siding with general Nkunda, while the Hutu rebels have joined forces with the national and Angolan armies to help the DRC government.

“Neither the DRC, nor Rwanda, nor the rest of the central Africa region can afford to be dragged back into conflict. The international community cannot allow this to occur,” said Ban Ki-moon.

Tomaz Salamao, SADC’s executive secretary, says that after the summit leaders would send military advisors to help the DRC government.

The UN has already sent a large peacekeeping force to the region. With 17 000 soldiers Monuc, as the force is known, is the largest mission to be sent to any conflict area. But it has so far failed to end the violence, which in part is driven by competition for the area’s rich mineral resources.

It is believed that the UN is calling for a further 3 000 soldiers to bolster their numbers.

Aid agency efforts to help thousands of people displaced by fighting in the DRC largely failed on Saturday, despite an appeal by African leaders for a ceasefire.

Speaking to journalists in Goma in the east of the country, Gloria Fernandez, head of the UN office for the coordination of Humanitarian Affairs, said it was imperative that help gets to those who need it as a matter of urgency.

“Our priority is to restart the activities at many health centres in the area of Rutshuru and Kiwanja,” she said. “We’re taking health supplies, water, and sanitation.”

This will be the first coordinated international effort to reach at least 50 000 displaced civilians, who the UN fears have left unprotected camps around Rutshuru, 70km north of Goma, where fighting has also been rife.

The refugees are thought to be roaming the bush, seeking safe shelter, food, water and care.

During the press conference, Fernandez pleaded with both Nkunda’s forces and the Congolese army to let civilians move freely to areas where they felt safe and could receive help.

In the wake of SADc’s call for a ceasefire, Nkunda has said it would be a mistake for the body’s troops to take a side; that they should rather be neutral. He said they if they favour the government’s position and fight with its allies they will face the wrath of the rebels.

Speaking to news agency Reuters on 10 November Nkunda said, “If they come in and fight alongside the FARDC [Congolese government soldiers] and the FDLR [Rwandan Hutu rebels], they will be weakened, they will share the same shame as the DRC government.”

“If SADC engages like this, they will have made a mistake … I am ready to fight them.”