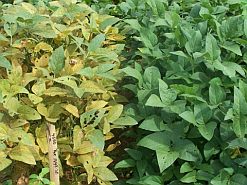 The resistant cultivar, right, compared
to rust-afflicted growth on the left.
(Image: IITA)

West and Central African farmers will soon be able to enjoy better harvests thanks to the development and imminent distribution of a soya bean variety that resists the invasive and highly destructive Asian soya bean rust.

The plant was developed at the Nigeria-based International Institute for Tropical Agriculture (IITA) in , with further assistance from the National Cereal Research Institute.

It is the first rust-resistant soya bean variety to be made available for cultivation, and is due to be released soon in not only in , ’s most populous country, but also in other West and Central African countries.

IITA pathologist Ranajit Bandyopadhyay, speaking to the Africa Science News Service in July 2009, said the new soya bean variety, known as TGx 1835-10E, has resistance genes that give it the edge against all types of rust fungus currently known in Nigeria.

He also said that IITA has a back-up stock of several other resistant strains of soya beans, just in case the rust fungus adapts to TGx 1835-10E and the resistant soya bean succumbs.

Seeds are expected to be available by the start of the 2010 sowing season at a nominal cost, making the new variety affordable for small farmers.

Halting the spread of the fungal disease could literally mean the difference between life and death for many impoverished Africans who depend on soya production for their livelihoods.

It is generally agreed that the most effective rust-control method is a combination of chemicals and the use of resistant soya bean strains. The latter have not been available until now, and chemicals are often unaffordable for African subsistence farmers.

The new cultivar is not resistant to all fungal diseases, but it will go a long way towards providing peace of mind to those farmers whose entire income depends on the success of their crops.

“It does give relief to farmers faced with the challenges of rust disease without any other solution,” commented Cereal Research Institute pathologist Olumide Shokalu.

Asian soya bean rust originated in in the early 20th century. There are several types which vary in virulence, but it is the most aggressive strain – caused by the Phakopsora pachyrhizi fungus – that is currently causing worldwide ruin.

The disease means disaster for farmers, especially those working on a small scale, because the spread of its spores causes widespread defoliation and considerable yield loss – as much as 80%. And in countries which depend on agriculture for income, such as where about 60% of Nigerians work in the agricultural sector, every plant counts.

The disease is found in most soya bean growing areas of the world. While the parasite does need living tissue to survive, it is unfortunately compatible with over 90 other plant species, including commonly grown crops and weeds such as kudzu. This makes it even harder to eradicate.

However, TGx 1835-10E offers hope for hard-pressed African farmers who do battle daily with plant diseases, wild animals that plunder their crops, and the unforgiving climate.

The IITA says the new variety has the potential to significantly increase soya bean production in ’s high-risk areas. As well as being rust-resistant and early-maturing, TGx 1835-10E is also high-yielding. IITA data shows that it yielded an average of 1 655 kg/ha grain and 2 210 kg/ha fodder in field trials in .

The TGx 1835-10E breeding line was one of only three out of an initial 178 that excelled through successive rounds of testing in the field between 2002 and 2006.

TGx 1835-10E received approval for general cultivation in in December 2008 and was registered with the Nigerian National Variety Release Committee in June 2009.

The P. pachyrhizi fungus arrived in Africa in 1996 and has spread rapidly across the continent, affecting countries including , , , , and . It was first reported in in 1999 and in in 2001.

The United Nations Food and Agriculture Organisation names , and as the continent’s main soya bean growers. However, these countries have suffered devastating losses to the persistent pest.

According to stopsoybeanrust.com, has reported yield losses between 10% and 80% in recent years. Neighbouring has lost between 60% and 80% of commercial crops due to the fungal disease.

Soya bean rust reached South America five years after its arrival in , and has caused heavy losses there too. is reported to have lost US$2-billion (R16-billion) due to crop failure in 2003, although the country had spent $400-million (R3.2-billion) on fungicides.

In September 2004, fungal spores borne on hurricane winds reached North America, via . By then, the US was on the alert and had put into place a control strategy.