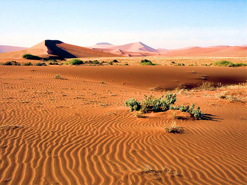 Namibia’s deserts are rich in supplies of
uranium, which are drawing increased
foreign interest, especially from Russia. 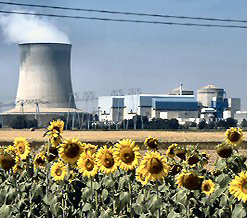 Uranium is used to produce nuclear fuel,
which is a carbon-neutral source of energy.

Yellowcake is a concentrated mixture of
uranium oxides that is further refined to
extract pure uranium. (Images:
Wikimedia Commons)

Lucrative uranium deposits in Namibia’s deserts, which could make the Southern African country a top producer of the radioactive element, are drawing increasing foreign interest. Russian President Dmitry Medvedev will visit the nation this week to revive cooperation in uranium mining and energy production.

Uranium is used to produce nuclear fuel, which is a carbon-neutral source of electrical energy.

Although Russia has shown interest in Namibia’s uranium resources since 2007, “nothing has happened” since then, said Robin Sherbourne, group economist for South Africa’s Nedbank in Windhoek, Namibia. “We’ll see what happens this time.”

Uranium exploration projects are spreading across Namibia, which aims to benefit from renewed global interest in nuclear power with its large uranium deposits, currently only mined at two locations in the country.

The main mine, Rossing, 65km inland from the seaside town of Swakopmund, runs 5km long and 350m deep. It’s thought to be the world’s fifth largest primary uranium mine and its reserves are estimated to last until 2020, if production continues at the current below-capacity levels.

The majority of Rossing is owned by Australian mining giant Rio Tinto with a 68.6% stake. Iran (15%), South Africa (10%) and Namibia (3%) also have shares in the operation.

Rossing was threatened with closure in 2003 when uranium prices plunged as the global supply was inflated by enriched nuclear fuel from the former Soviet Union. Fears of climate change have, however, renewed the search for carbon-neutral energy, thus pushing uranium prices up again.

In 2006 Rossing announced a US$112-million (R902.4-million) expansion drive, which, together with the Langer Heinrich mine, 50km southeast of Rossing, has propelled Namibia to the top ranks of global producers, behind only Canada, Kazakhstan and Australia. The country now accounts for 10% of the world’s production.

Langer Heinrich is estimated to have a reserve base of 24.5-million tons of uranium, making it productive for 27 years with the potential for expansion of the reserves and mine life given the favourable surrounding geology. It is owned by Australia’s Paladin Resources.

Some 35km north of Rossing is Trekkopje, which is owned by French group Areva. The $750-million (R6-billion) project will have a shallow open-pit mine, as 80% of the uranium ore is less than 15m deep there. Production is expected to begin by the end of 2009.

With this development, “Namibia could increase its production to 42-million pounds [about 19 051 tons] within five years, which could make us number one”, Sherbourne said.

But to achieve this, Namibia must first tackle two major obstacles: the desert has no water needed to control the dust and radiation from the uranium mines and the country lacks enough energy to power its projects.

Possible solutions include the building of a desalination plant on the Atlantic coast, so ample supplies of seawater can be converted to a useable medium for the mines. The Namibian government is also considering new coal- or gas-fired plants and has committed to a policy of supplying its own electricity from nuclear power by 2018.