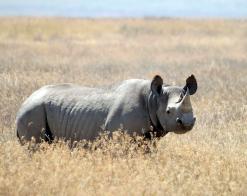 Because Africa’s black rhino population is
much smaller than that of the white rhino,
the animals are more vulnerable to threats
such as poaching and habitat loss.
(Image: Wikimedia)

The World Wide Fund for Nature (WWF), in partnership with the Kenya Wildlife Services, has completed the second, and final phase of its US$72 250 (R560 000) project to transport 21 black rhinos from the privately owned Solio Ranch and Mugie Rhino Sanctuary, both in the Rift Valley province, to Ruma National Park in the southwestern Nyanza province.

Home to a wide variety of birds and animals, including roan antelope which are found nowhere else in Kenya, the 120-square-kilometer Ruma National Park is managed by the Kenyan Wildlife Services (KWS) and was declared a rhino sanctuary at the end of 2011.

Another advantage is that it is free of tsetse fly, that large biting insect that transmits diseases such as sleeping sickness.

While the move was underway, the country’s forestry and wildlife minister Noah Wekesa reaffirmed Kenya’s stance on poaching, saying: “I want to send a strong message to the poachers that they shall be dealt with severely according to the law.”

He then said that his ministry will review current penalties for those caught poaching, and if necessary would make them harsher.

The move was also done to help encourage tourism in western Kenya. While it was once normal to see several rhino at once on a game drive, that is no longer the case, and the mighty animals were last seen in the area more than 50 years ago.

Kenya’s black rhino (Diceros bicornis) population now numbers just 620, when a few decades ago it stood at over 20 000. The lowest numbers were seen in the mid-1980s, when just 300 individuals remained.

The country, which once had one of the largest rhino populations on the continent, is working tirelessly to help save the remaining individuals, and has seen its efforts rewarded with the doubling of the population of black rhinos in recent years.

The ever-present poaching situation is a serious threat to the goals of KWS to boost the numbers.

However, Kenya has still escaped relatively lightly compared to the poaching toll in other countries. Of the almost 500 rhino killed in Africa over the past five years, 70 died in Kenya. In South Africa, 52 animals have been poached in 2012 alone – around one every day.

Most poaching activity occurs in South Africa and Zimbabwe because of the bigger populations found there.

The greatest demand for rhino horn comes from Asian countries, whose citizens mistakenly believe it has near-miraculous medicinal properties, and Middle Eastern nations such as Yemen, where the horn is carved into a highly prized dagger handle.

The sophistication and the level of organisation of poachers and illegal traders has soared in recent years. Poachers are becoming almost military in the precision and speed of their operations and it has been noted that some former soldiers, with their combat training, have taken to poaching.

Various groups such as the WWF, the International Rhino Foundation, the African Rhino Specialist Group of the International Union for the Conservation of Nature, and Saving Rhinos, to name a few, as well as national wildlife authorities, are fighting a constant battle to protect the sought-after beasts.

Because of the poaching problem, KWS conducts a rhino census every year between July and October in the Tsaveo West Sanctuary. A few months after the census, which provides information on the number and distribution of black rhinos, the animals’ ears are notched to help with identification and tracking.

During the 2010 exercise, transmitters were also inserted into the rhino horns. Under sedation, the animal received the device, which was placed into a hole drilled into the horn. The hole was sealed and the animal was marked, allowed to recover and then released.