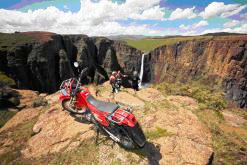 Riders for Health, the motorbike-based charity arm of the MotoGP racing championship, is inviting its supporters to take part in an inspirational ride through Lesotho, where they will help raise funds for the organisation and experience its work first-hand.

Experience is touted as “an adventure for the heart and mind”. It was launched at the International Motorcycle and Scooter Show in November 2009 by Riders co-founder and multiple MotoGP champion Randy Mamola, and takes to the road in October 2010.

The eight-day trip can accommodate a limited number of riders. Details are expected imminently, and interested off-road biking fanatics are encouraged to email experienceafrica@riders.org to make sure they don’t miss out on any announcements.

Mamola has already ridden the route, which encompasses some of the famous Roof of Africa rally’s roads, and confessed to being overwhelmed by the experience.

“I have had the most incredible 10 days riding in the wonderful country of ,” he said at the launch. “The Riders for Health Experience Africa ride is sure to be a life-changing experience.”

Experience articipants, who pay £5 000 (R58 819) upfront, are assured that £2 000 (R23 525) of that sum will go directly to the Riders initiative. Flights, accommodation, motorbikes, meals, and mechanical and medical support are covered by the remainder. A valid motorbike licence is a prerequisite.

They will ride through the mountainous country to raise funds and awareness of the organisation’s ongoing work, and will also be able to get a personal glimpse into the outreach projects already underway.

They can expect to interact with health workers in the country, riding with them to isolated areas and experiencing how reliable transport has transformed their jobs. They will also visit clinics and communities and see how the treatment of HIV/Aids and tuberculosis is accelerating because of increased accessibility to medicines and education.

Riding to save lives

Riders for Health is the official charity of the Grand Prix motorbike championship, or MotoGP. The organisation operates in , , , , and , with projects completed in , Democratic Republic of Congo and . Its patron is HRH The Princess Royal.

is in particularly dire need of the Riders’ assistance. The tiny kingdom lies among the soaring peaks of the Drakensberg and Maluti mountains, and this harsh terrain is often difficult to navigate with conventional vehicles. Even those with four-wheel drives can struggle.

is the only country on earth whose entire altitude lies over 1 000m above sea level. Its lowest point is at the junction of the and at 1 400m, and its highest is the Thabana Ntlenyana peak at 3 482m. More than 80% of the country lies higher than 1 800m.

The kingdom has been hard hit by the global HIV/Aids epidemic. About 25% of the adult population is thought to be HIV-positive, according to international Aids charity Avert.

This is where the Riders’ work is so crucial. People living in more remote areas have to make their own way to reach basic facilities such as shops and clinics – sometimes trudging for hours and in freezing temperatures.

Using motorbikes to navigate tricky terrain, Riders for Health brings care to communities that otherwise might have no help at all. Working hand in hand with the Ministry of Health and related bodies, the organisation enables health workers to easily reach their patients, and also transports medical samples to laboratories for testing and diagnosis.

The organisation was born out of the concern and interest of a group of people working on the MotoGP circuit in the 1980s. Some of them, including Mamola, visited in the late 1980s and were dismayed to see the many broken-down cars that could not be fixed because of lack of expertise.

The group decided to take action by developing innovative ways of managing vehicles in difficult conditions, and at the same time began mobilising support for a new transport initiative that would minimise the toll taken by rough terrain on less hardy vehicles.

The international motorbike community responded enthusiastically and continues to give prominence to the scheme at events such as the British Grand Prix and the annual Riders/MotoGP Day of Champions.

The first national programme was run in in 1991, followed three years later by another in . The organisation is based in the but has branches in a number of European countries as well.