It was a tricky global environment when Boutros Boutros-Ghali became the secretary-general of the United Nations in 1992. The world was emerging from the Cold War and countries were redefining relationships with each other. He navigated a new path for the organisation. 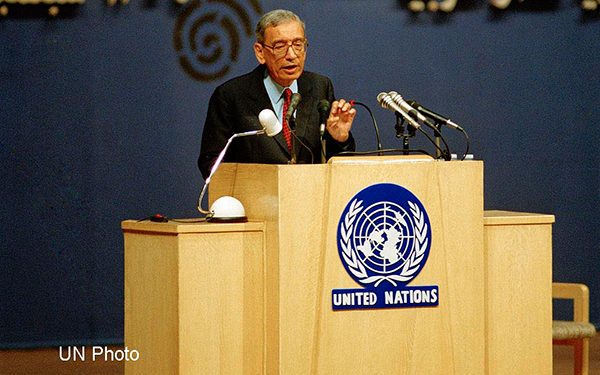 United Nations Secretary-General Boutros Boutros-Ghali addresses the International Conference on Population and Developments in Cairo on 5 September 1994 to produce a Programme of Action. (Image: UN Photo, CC BY-NC-ND 2.0, via Flickr)

Boutros Boutros-Ghali became the sixth secretary-general of the United Nations (UN) on 1 January 1992, when he began his five-year term at the helm of the global organisation. He died on 16 February 2016 at the age of 93.

“We pay tribute to the former UN secretary-general and wish to convey our deepest condolences to his family and his country, Egypt,” said President Jacob Zuma on his death. “May his soul rest in peace.”

Born in Cairo, Boutros-Ghali was the first African to hold the position of secretary-general of the UN. During his tenure, the world was in a “critical post-Cold War period when the world body was redefining itself and engaging in more international peacekeeping operations that often received criticism for its efforts”, said the Presidency.

Time of promise and peril

Addressing the General Assembly’s special tribute at UN Headquarters in New York, current Secretary-General Ban Ki-moon said Boutros-Ghali had both the fortune and the misfortune to serve as the first post-Cold War UN chief.

“While the United Nations was never as paralysed during the Cold War as many have portrayed, the new dynamic gave the organisation new leeway to act,” Ban said. “This brought promise and peril – and Mr Boutros-Ghali experienced both.

“Perhaps he was too direct for some; he might have been too professorial for others. Some definitely found him too independent – a goal that he considered among the highest virtues for any secretary-general of the United Nations,” said Ban.

He described Boutros-Ghali as relentless in defending the organisation and its charter, and quoted the former secretary-general:

“With all the convulsions in global society, only one power is left that can impose order on incipient chaos: it is the power of principles transcending changing perceptions of expediency.”

Soon after Boutros-Ghali was inaugurated, the UN Security Council met in it’s first-ever summit of Heads of State and requested a report on the way the organisation could strengthen capacity for preventive diplomacy, peace-making and peacekeeping. It resulted in a report, penned by Boutros-Ghali, called An Agenda for Peace.

“As secretary-general, he presided over a dramatic rise in UN peacekeeping,” Ban told reporters. “He also presided over a time when the world increasingly turned to the United Nations for solutions to its problems, in the immediate aftermath of the Cold War.” 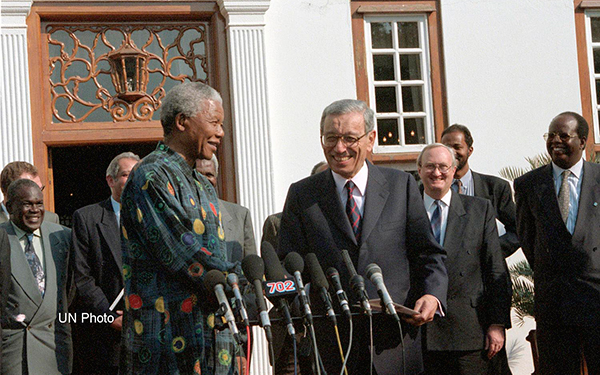 Boutros Boutros-Ghali, secretary-general of the United Nations, with President Nelson Mandela at the presidential residence in Pretoria on an official visit to South Africa on 26 April 1996. (Image: John Isaac, UN Photo, CC BY-NC-ND 2.0, via Flickr)

In his article celebrating 70 years of the UN, Boutros-Ghali wrote that the invention of peacekeeping was one of the organisation’s proud moments.

Another standout moment for him was the declaration of human rights and the World Conference on Human Rights held at Vienna in 1993. “There have been many conferences setting world agendas and goals before and after Vienna, but for the world to come together to define human rights, and to state clearly a global commitment to their achievement, was an important moment in history,” Boutros-Ghali wrote.

Watch more on his appointment to the UN:

He became Professor of International Law and International Relations at Cairo University, and from 1974 to 1977, he was a member of the Central Committee and Political Bureau of the Arab Socialist Union.

He “had a long association with international affairs as a diplomat, jurist, scholar and widely published author”, according to his profile on the UN website.

He became a member of the Egyptian parliament in 1987 and was a member of the secretariat of the National Democratic Party from 1980. Until assuming the office of secretary-general of the UN, he was also vice-president of the Socialist International.

Boutros-Ghali was also part of the Camp David Summit Conference in September 1978, which resulted in the Camp David Accords between Egypt and Israel, signed in 1979.

“He led many delegations of his country to meetings of the Organisation of African Unity (OAU) and the Movement of Non-Aligned Countries, as well as to the Summit Conference of the French and African Heads of State. He also headed Egypt’s delegation to the General Assembly sessions in 1979, 1982 and 1990.” 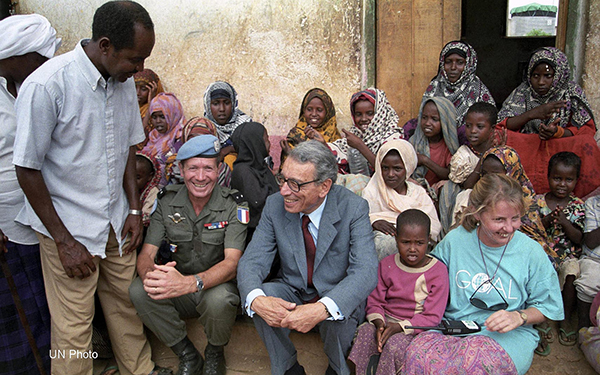 Secretary-General Boutros Boutros-Ghali (third from right) visits with young residents of a UN-supported orphanage on 22 October 1993, operated by the Irish humanitarian organisation GOAL. To the left of the secretary-general is Brigadier General Maurice Quadri, commander of the French contingent of the Second United Nations Operation in Somalia (UNOSOM II). (Image: F Ribere, UN Photo, CC BY-NC-ND 2.0, via Flickr)

In celebrating the 70th anniversary of the UN, Boutros-Ghali wished to build on past achievements and update it for a changing, modern world. “Just as the United Nations invented peacekeeping, we now need to modernise the practice, and the Security Council’s use of the instruments at its disposal to promote international peace and security. We need a new Agenda for Peace,” he wrote.