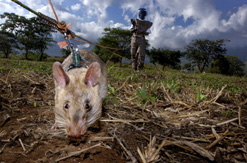 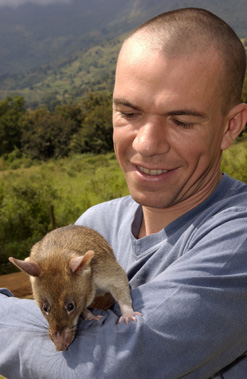 Bart Weetjens with one of his trained rats.
(Image: Sylvain Piraux) 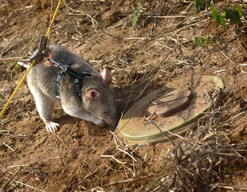 The rat is trained to dig when it sniffs a
mine.
(Image: Sylvain Piraux) 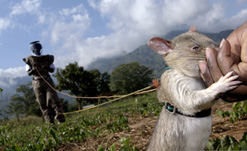 The rats are rewarded for a job well done.
(Image: Sylvain Piraux) 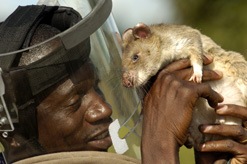 There is a strong bond between the rats
and their trainers.
(Image: Xavier Rossi) 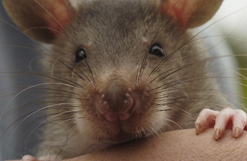 Not just a pretty face – these adorable
animals are bright, too.
(Image: Xavier Rossi)

African countries such as Angola, Mozambique and the Democratic Republic of Congo have been devastated by civil war for decades. Although the conflicts are over and the countries are slowly rebuilding themselves, one deadly legacy remains – landmines.

Landmines can lurk underground for decades, primed to explode and destroy the limbs and lives of rural people, and hamper any kind of development. But demining the land is a slow, dangerous and expensive process – particularly in these vast African states.

Until now. A Danish engineer has developed an astonishing new system of locating and destroying landmines that is cheap, safe and quick. All it requires is trained deminers – and lots of rats.

Most of us think of engineers as people who fiddle around with machines, electronic circuits, chemical reactions or cement. But Bart Weetjens is an engineer with a difference – part of a new wave. He studied design engineering at the University of Antwerp, and then worked at a couple of jobs that most people would have thought were pretty cool – designing coaches and then leisure goods.

But he was frustrated. He wanted to use his considerable skills to address real problems in the real world, and he had a romantic notion that he wanted to live and work in Africa. But he still wasn’t sure where exactly in Africa he wanted to work, and what exactly he wanted to do.

Then in 1993 he found a muse in the form of a tall, beautiful blonde. Princess Diana was a tireless campaigner for the removal of landmines, and her message fell on at least one pair of receptive ears. Weetjens had found his vocation.

Landmines are the most hideous and insidious of weapons – and that’s saying a lot, because there aren’t any nice and gentle weapons.  The problem with landmines is that once they’ve been laid, they’re there for a long, long time.

Weetjens would have been very aware of this in his native Belgium. Amazingly, the Belgian bomb disposal unit gets about 700 calls a year to remove and defuse landmines and unexploded ordnance from the First and Second World Wars. The Second World War ended more than 60 years ago, and Belgium is a small, densely populated, technically advanced first world country. But on average two unexploded devices are found there every day.

Then think of vast rural countries such as Angola, Mozambique or the Democratic Republic of Congo. It is estimated that about 200 million unexploded landmines lie buried across the world – mostly in Africa and the Middle East. And this is only an estimate because minefields, by their nature, are not exactly well documented.

Weetjens relates how Diana got the message across that landmines were not only awful weapons that maim and kill people. They are also an effective barrier to development. People can’t farm, or fish or prospect with landmines around. So in many once war-torn African countries they have to be removed before recovery can begin.

Having decided that landmines were the problem he wanted to solve, Weetjens began work. He attended conferences, read widely and tried to find out all he could about demining. One of the biggest problems, he discovered, is that demining is expensive and depends heavily on high-level skills that mostly must be imported into developing countries.

Before Weetjens there were two ways of finding mines. Using metal detectors, the traditional method, was costly, high-tech, slow and dependent on foreign expertise. Using dogs to sniff out mines was faster and more cost-effective – particularly in places like Afghanistan. But dogs didn’t work well in Africa. Norwegian People’s Aid brought 20 expensive trained demining dogs into Mozambique, but half of them were dead in six months. They were simply not adapted to Africa’s climate, and its interesting array of external and internal parasites.

Then Weetjens came across an article describing how two US scientists had successfully trained gerbils to detect explosives, and the penny dropped. Whatever a dog or gerbil could do a rat could do as well – possibly even better. And certainly cheaper. But he was met with derision when he mooted the concept.

From when he got the idea in 1995, it took two years to get funding to implement the programme and then, with the help of a rodent specialist, he set out to find the perfect rat.  This turned out to be the giant pouched rat, which is found all over Africa. It is resistant to local diseases, is relatively long-lived – surviving easily to the age of about eight in captivity –  and is much less aggressive than the more familiar city rat.

It is also quite a lot bigger, being the size of a cat, which makes it easy to see as it scuttles over minefields. Like other rats, it is highly intelligent, has an excellent sense of smell, and is easy to train.

It took another three years to breed up a stable of rats and to train them. The project was based at the Sokoine University of Agriculture in Morogoro, near Dar es Salaam. This site was chosen because Tanzania is a relatively stable country, and the university has a long relationship with the University of Antwerp.

The first part of the programme was to recruit and train rat trainers, as the aim of the project was to produce a locally sustainable solution that would minimise, if not totally eliminate, dependence on imported expertise and technology.

The rats were first trained to detect the smell of explosives in small contained areas, using classic sound association and food reward techniques. Once they had got the hang of it, they were trained on a specially built 24-hectare minefield. With 1 553 defused landmines of 14 different types, the field is the most varied minefield in the world, so it’s a good training ground.

The real test was when the rats and their trainers were moved to Mozambique in 2003 to work their skills in the field – with real, live landmines. But this turned out to be easier than the test field. Ten years in the ground had increased the mines’ concentration of tell-tale vapour, making them easier to smell out.

To demine a field, it is divided into squares bisected by corridors that have been cleared with metal detectors. The trainers walk in the demined corridors and the rats, wearing little harnesses and leashes, run along laid-out lines, sniffing the ground.

If they find a mine, they dig, showing the trainer where it is. The rats only weigh a couple of kilograms at most so they can’t set the mines off. Each area is covered by two or three different rats, and the results are collated before the mines are destroyed in a controlled detonation.

It takes about half an hour to detect all the mines in a 100 m2 block using rats, whereas it would take two days to clear the same area in the traditional, more expensive way using metal detectors.

With a sigh of relief, Weetjens realised the technology worked, so he applied for accreditation with International Mine Action Standards. The technology was accredited in 2004, and the programme as a whole in 2006.

Each rat and trainer pair needs to be tested every six months, and the standards are high – 100%. Not only can the team not miss a single landmine, which obviously could have dire consequences in the real world, they can’t get a false positive identification.

Although the animals and trainers are accredited as pairs, the beauty of rats is that they are not quite as dependent on one trainer as dogs are. But that doesn’t mean they don’t build up a relationship with their human colleagues. The trainers and other team members have developed a definite fondness for the rats. And, as they are well-fed, well-groomed and kept clean, they are actually rather cute – with their little twitchy noses and bright black eyes.

The project is not only ground-breaking in its effective removal of landmines. It also challenges some of our most cherished prejudices. It’s shown us that rats can be clean and useful animals that save lives and make a positive contribution to society. It’s also shown that engineers can be people who work with ideas as opposed to machines, and that technology can be adapted to suit the needs of people, instead of the other way round.