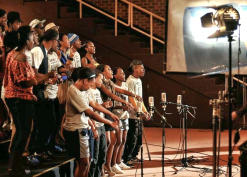 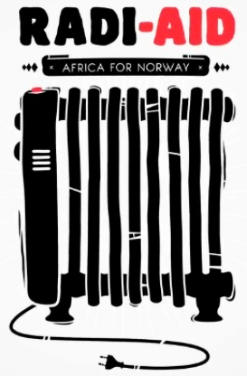 It’s cold and snowy in Norway, but hot and sunny in Africa. It’s time to share your heat, Africa; keep Norway warm.

Back in 1984, the British and Irish supergroup Band Aid released the song, Do They Know It’s Christmas, to raise funds for the poor and starving of Africa. It contained the line, “There won’t be snow in Africa this Christmas time”.

Inspired by Band Aid and the later Live Aid, in 1985 a group of Norwegian artists going by the name of Forente Artister, which means United Artists, recorded the song Sammen for Livet, or Together for Life, to raise money for the victims of hunger in Africa.

Now in a reversal of fortunes, Radi-Aid is urgently calling on Africa to warm up the snow-covered lives of Norwegians by donating radiators – or oil heaters, as they are familiarly known in South Africa.

It is a parody, of course, but one with a serious message: the spoof video was made with the intention of changing global perceptions of Africa. It was made by the Norwegian Students’ and Academics’ International Assistance Fund (SAIH) together with a group of performing arts students from KwaMashu Community Advancement Projects who took the lead roles in the video.

AN organisation of students and academics, SAIH focuses on education for development, and supports the right to be educated. It has projects going in projects in Zimbabwe, South Africa, Zambia, Bolivia and Nicaragua. The organisation celebrated its 50th anniversary in 2012.

“There is heat enough for Norway, if Africans would share it,” says Radi-Aid.

Released on 16 November, in under a month the video has clocked up more than 1.8 million Youtube views and counting. It depicts Norwegians suffering in extremely harsh, snowy conditions and Africans singing in sympathy for the “kids dying in Norway”. It has created an international stir, and has been featured on BBC and Al Jazeera news channels and in The Guardian newspaper.

It’s been seen as a wake-up call for the world, pointing out that the traditional negative images of poverty, famine, war, and suffering are not all that Africa has to offer.

“Collect radiators, ship them over there, spread some warmth, spread some smiles,” says the Radi-Aid spokesperson, South African rapper Breezy Vee, who appears in the video. “Say yes to Radi-Aid.”

The project, set up by SAIH with youth education campaign Operation Day’s Work, was funded by the Norwegian Agency for Development Co-operation and the Norwegian Children and Youth Council. The point of Radi-Aid, according to the campaign’s website, is to “publicise that the media should show respect, provide better information on Africa and not just exploit stereotypes [of the people] they seek to help. Aid should be based on real needs as opposed to good intentions.”

The video is also available for download through iTunes. Apparel is available at the Radi-Aid online shop.

Turn the stereotype around

SAIH president Erik Schreiner Evans explains: “The reason that we did it this way was to sort of turn the stereotypical image upside down. Because way too often we see charitable fundraisers that show real problems, but they portray especially Africans as passive recipients of aid in need of the charity of countries in Europe like Norway. And the subtle message is also that we, the Europeans, are the developed ones, the successful ones, and the ones able to share of our bounties, and are really the only sort of, real protagonists, in this story.”

Norway lies along the western part of the Scandinavian peninsula, jutting out into the Arctic Ocean and North Sea; a large part of the country is inside the Arctic Circle. Winters are brutal.

“A lot of people are not aware of what is going on there right now,” Breezy Vee parodies on the video.

But in truth, Norway has one of the highest per capita GDP rates in the world, with an unemployment rate of just 3.3%, according to the CIA’s World Fact Book, which has no listing for people living below the poverty line. It is a wealthy country with large reserves of oil, natural gas, minerals, seafood, lumber, and hydropower.

Norway is also among the top 10 international aid donors to Africa, according to the Paris-based Organisation for Economic Co-operation and Development.

The country clearly does not need aid, so why the Radi-Aid campaign? The answer is to emphasise that Africa is portrayed in such a way countless times, with its brighter side neglected. The Radi-Aid campaign shows the concern that many people – including Africans themselves – just give up on Africa because media portray it as if nothing is getting better. Africa should not be something that people either give to or give up on.

“Imagine if every person in Africa saw the Africa for Norway video and that was the only information they ever got about Norway,” says Radi-Aid. “What would they think about Norway?”

“The truth is that there are many positive developments in African countries and we want these to become known,” says SAIH. “We need to educate ourselves on the complex issues and get more focus on how western countries have a negative impact on African’s development. If we want to address the problems the world is facing we need to do it based on knowledge and respect.”

Through SAIH and other NGOs that work with local groups in southern Africa and Latin America in education, research and other projects, Norway has setup successful operations in African countries. Norwegian missionaries first landed in Africa in the late 19th century when they settled in KwaZulu-Natal. The country later became a supporter of South Africa’s fight against apartheid.

South Africa and Norway share a long history of collaboration in the fields of arts and culture, environmental protection and energy, human rights and peace and security, education and research, and trade and investment.