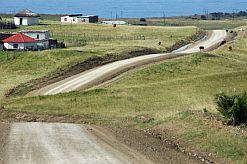 Ethiopian Prime Minister Meles Zenawi announced on 1 July that the government had approved a record 70% spend of its total annual budget on poverty and infrastructure development. This is the largest spending on these programmes by any African country.

“We are working hard to electrify rural towns, and a large amount of our development spending will go on roads,” said Zenawi.

Ethiopia is one of Africa’s poorest but fastest growing countries. Over the past four years, the country’s economy has grown by 11.2%, mainly thanks to improved infrastructure. Government says it is planning to attract more foreign investment in agriculture, mineral exploration, and hydropower.

Breaking down the budget, Zenawi said more than R13-billion ($1.7-billion) would be spent locally by Ethopia’s nine federal regions. R6.8-billion ($879-million) will go to the country’s road network and the rest of the development budget will be spent on electrification. Ethiopia has spent R27.8-billion ($3.6-billion) on roads over the last decade.

Zenawi said at least 10% of the total budget has been allocated to developing the country’s strong agricultural sector, which relies heavily on agricultural exports. Ethiopia is the continent’s top coffee exporter and second biggest exporter of sesame seed.

Defence spending will increase by 10% to R2.5-billion ($323-million). The country has the biggest army in the in the Horn of Africa, and is a key US ally.

Domestic revenue accounts for R23-billion ($3-billion) of the budget while R8.5-billion ($1.1-billion) comes from aid. The R11.5-billion ($1.5-billion) deficit will be paid by foreign loans and grants, said Zenawi.

Opposition parties are sceptical of Zenawi’s confidence in securing the deficit from foreign sources, because they believe the country’s recent election has damaged its relations with foreign investors.

But Zenawi said, “The 20 billion birr [$1.5-billion] is little of the total pledged money and we have made sure it will land. There is zero chance this money won’t make it.”

Though the International Monetary Fund predicts much lower growth of just 5% for 2010, Zenawi said he’s optimistic the country will achieve 10% growth in this year.

Ethiopian opposition parties have criticised the ruling party, accusing them of inflating the growth figures to attract foreign investment. They argue that the growth has not reached the disadvantaged people in a country where 13-million out of 80-million people needed foreign food aid in 2009.