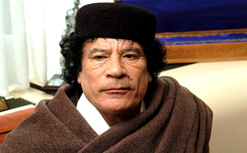 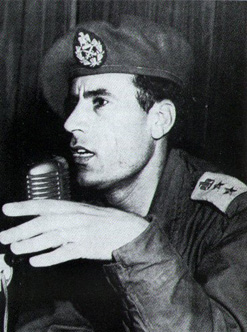 A young Muammar Gaddafi during his
military days.
(Image: Wikimedia)

Libyan President Muammar Gaddafi, the newly appointed chairperson of the African Union (AU), has reiterated that Africa will only truly be powerful once it’s led by one strong government.

At his appointment on 2 February during the 12th Ordinary Session of the Assembly of Heads of State and Government in Addis Ababa, Gaddafi was adamant that the power of Africa lies in its unity.

“I shall continue to insist that our sovereign countries work to achieve the United States of Africa,” he said after accepting his role as the new AU leader.

Gaddafi said the united Africa would have a single military force and one currency. Africans would only need one passport and would be able to move around the continent freely.

But African leaders may not be as ready for the move as the controversial Libyan leader thinks.

During the first day of talks behind closed doors, member states fervently debated the “unity project”, which was on the agenda.

In the end, as a compromise, it was decided that the African Union Commission – which overseas the work of the AU – would be transformed into an AU authority with a broader mandate, said the outgoing chairperson, Tanzanian President Jakaya Kikwete.

“In principle, we [are saying] the ultimate is the United States of Africa. How we proceed to that ultimate – there are building blocks,” Kikwete said.

Uniting Africa a step at a time

Briefing journalists about the new body on 2 February, AU Commission Chairperson Jean Ping said the new authority would deal with greater issues than the existing commission. “We are creating an institution with a bigger mandate, with bigger capacities, which moves us towards the goal of the union government.”

Ping said that a unified continent, which would give Africa stronger bargaining power at international forums, has been a dream of several generations of pan-Africanists.

Some head of states, however, voiced their reluctance to relinquish power and opted rather to strengthen regional institutions before creating a continent-wide system.

But despite the reluctance of some leaders, Gaddafi is optimistic that the move will materialise.

He told delegates that so serious was he about his “unity project” that he expected the venture to be approved at the organisation’s next meeting in July unless, he added, the majority of member states were against the move.

The main point of contention is how the unity government will affect the sovereignty of the 53 member states and economies of differing strengths, where some African governments are economically weak, and others strong.

The member states have, however, made it clear that the issue is not whether a union government should be in place or not, but rather a matter of identifying the steps of how to get there and when it should happen.

Timelines and the method for the integration process will be set out according to the Accra Declaration, adopted in 2007 at the 9th Ordinary Session in Accra, Ghana.

The Accra Declaration expresses the AU leaders’ conviction that the ultimate objective of the AU is the United States of Africa.

During this week’s intense summit, which was extended by a day to four days to accommodate all the outstanding issues, Kikwete gave his last speech as the chair, appealing to African leaders to put political greed aside and focus on improving Africa’s economic status.

“Africa must be included in the search for global solutions to the current financial crisis.”

Kikwete said more time needed to be dedicated to discussing a global solution to Africa’s under-development.

He further stressed the need for Africans to seek a greater voice on global affairs and called on Africa to establish better working ties with European and Asian leaders.

The appointment of the infamous Libyan leader to the most powerful African body has been met with mixed reaction.

The BBC spoke to Africans from different regions about what a Gaddafi-led AU would mean to the continent.

Pius Serlorm Dzramado, a 28-year-old tailor from Accra, was not so optimistic about the move. “Gaddafi does not adhere to the principles of democracy in Libya,” he said. “For those of us who believe in advocating democracy in Africa, choosing Gaddafi as African Union chairman is not progress.”

Dzramado said human rights abuses suffered by Libyans should have been enough to discourage the organisation to make the move.

“There doesn’t seem to be much respect for human rights in Libya, so I don’t think Gaddafi’s own country is a good role model for the rest of Africa. As AU head, I can’t imagine Gaddafi will have the moral courage to speak out against human rights violations in other African countries.”

Feras Al-Geblawi, a 29-year-old engineering student in Libya, is, however, of a different opinion. “Gaddafi is the bravest leader Africa has seen in the last 30 years. He always speaks his mind; he’s like a philosopher, very intelligent.”

“There are some people who say Gaddafi is not a good choice as AU chair, claiming we don’t have a strong record on human rights. But I haven’t seen any injustice here.”

Kenyan journalism student, 28-year-old Amos Marube, said he was not sure if the united Africa idea would work. “Gaddafi’s vision of a United States of Africa is far too ambitious; it will never happen,” he told the BBC.

Marube said governments must first get their act together before thinking of uniting the whole of Africa. “He wants to unite the continent – but here in Kenya we are already so divided by tribalism. If African countries are unable to unite nationally and regionally, I can’t see how Gaddafi would be able to unite us as a continent.”

At the helm of Libya for over 40 years now, Gaddafi is a saint to some, while he remains a villain to others.

Dubbed by former US president Ronald Reagan as the “mad dog of the Middle East”, Gaddafi is known for his unchanging stance of African nationalism.

He has been accused of taking part in acts of terror and his country suffered drastic United Nations sanctions after he refused to extradite two Libyans accused of planting a bomb in 1988 on Pan Am Flight 103, which exploded ever Lockerbie, Scotland and killed 270 people.

Gaddafi finally admitted responsibility for the attack in 2003 and paid over US$2.7-billion to the families of the victims, initiating the end of Libya’s international isolation.