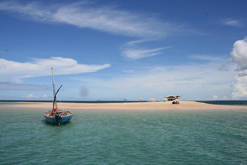 From Ibo Island you can sail by dhow to
have lunch on an offshore sandbar. 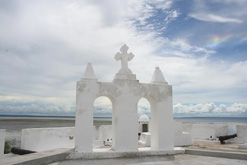 The ramparts of Ibo Island’s Fort of São
João Batista, which variously served as a
Portuguese military bastion, a slave house
and a prison. 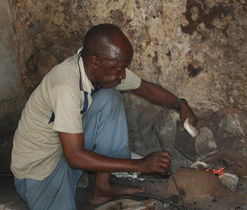 Inside the fort, a silversmith continues the
island’s long tradition of intricate
craftwork. 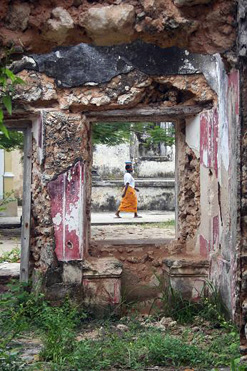 Ibo is one of those places that constantly
feels like it’s falling down – as if its
buildings are crumbling into the sand and
the sea.
(Images: Chris Thurman)

The old fort is full of intriguing sense data. Walking past one doorway, you hear the clang of metal beating metal and the murmur of voices; through another, you catch a glimpse of a man bringing a fire to life with the bellows of his lungs. The smoke mixes with the salty-stale smell of the ocean blowing in over the ramparts.

Outside, the sun that has flaked the paint on the walls beats down on your skin, and you seek shade under the canopy of the lone tree in the whitewashed courtyard.

Nowadays the Fort of São João Batista, or St John the Baptist, on the shore of Ibo Island off the coast of northern Mozambique is a pleasant place, occupied by a cohort of silversmiths producing finely-wrought jewellery. But for most of its more than 200-year history, the fort was a site of violence and oppression: the clanging sounds would have come from shackles and iron bars, the smoke would have risen from guns and canons, the voices would have been screams and moans.

The fort was built by the Portuguese in 1791 as a military bastion to ward off the Dutch, from whom they had wrested control of the Mozambican trade routes, after ousting Arab traders from the region some two centuries before that. It subsequently served as a slave house and then a prison in which many of those who opposed colonial rule were detained and tortured.

Its star-shaped, pentagonal building is the most recognisable structure on Ibo. It is the island’s most potent symbol, with its changing fortunes mirroring the shifting historical tides shaping life on the island.

Ibo is part of the Quirimbas archipelago, some 27 islands that form part of Mozambique’s Quirimbas National Park. While a strategically significant location for Portugal’s imperial ambitions, the archipelago remained isolated and developed its own particular cultural flavour.

As with the rest of Mozambique, Portuguese is a lingua franca, but locals greet each other with “Salama”, a linguistic reminder that there was an Arab settlement on Ibo in the 12th century. Arab and Chinese trading posts were established along the coastline of the mainland as early as 600 AD.

Ibo is one of those places that constantly feels like it’s falling down – as if its buildings are crumbling into the sand and the sea. Nowhere is this more evident than in the ghostly streets of what used to be the island’s wealthy areas, which are lined with the hollow shells of houses that were abandoned overnight when the post-independence government effectively expelled all “foreigners” in 1975.

This lends the island an evocative charm, but, of course, such slow degeneration is only romantic to temporary sojourners and holidaymakers. For those who live on Ibo, the lack of socioeconomic opportunity is a serious problem.

Yet the island’s great appeal to adventurous travellers is also its salvation. The Quirimbas are an exquisitely beautiful natural formation: warm azure seas, dazzling coral reefs, abundant sea life – a tropical paradise. Some of the islands are uninhabited or privately owned. Not so on Ibo, where the permanent population numbers some 4 000 – and the jobs available are limited.

For this reason, the silversmiths’ combined workshop and showroom at the fort is a welcome intervention. While the artisan-artists there are simply continuing an ancient Ibo tradition of producing fine metalwork, the growth of jewellery production and the employment it provides is largely the work Fiona and Kevin Record, the owners of Ibo Island Lodge.

When they first sailed into the harbour at Ibo some 15 years ago, the Records did not plan to stay for long. But the magic of the place soon captured them, and they decided to settle on Ibo and open the lodge.

This was a huge logistical challenge, but the beautifully understated coral-and-limestone lodge buildings Fiona and Kevin renovated are testimony to their determination. Since then, they’ve profited from bringing visitors to the island, but have also worked to create jobs for the people of Ibo.

“Part of Ibo’s charm was that it had fallen into decline, and harboured a history, culture and marine world totally unexplored,” says Fiona. “The area’s pristine beauty and the hospitality of the local people had a profound effect on us. We made a commitment to create a tourism project that would positively affect the lives of the impoverished community on Ibo.”

The silversmith venture is just one of the Records’ initiatives. In addition to employing 40 staff, each of whom supports an estimated 20 other people, the lodge is the centre of numerous community schemes providing both income and development opportunities. There is a Montessori school for the island’s children, as well as an adult education facility that teaches English and tourism awareness, as well as training in conservation, gardening and guiding.

Creating jobs also helps protect the local environment. The more jobs there are that don’t depend on fishing, the better for the increasingly overtaxed marine life of this World Heritage Site.

Along with a host of impossibly-coloured fish, underwater life in the Quirimbas includes a variety of turtles, sharks and rays. They, like the birds overhead that are an equally vital part of the ecosystem (there are 10 red-listed species in the Ibo area), are threatened by the sheer numbers of people whose livelihood is fishing.

Given all of this, Ibo Island Lodge offers guests something that most accommodation establishments cannot.

Yes, there are the bright and richly-furnished rooms, and the veranda view between palms and bougainvillea blossoms out to sea. Activities include kayaking through mangroves, snorkelling and dhow sailing, while low tide brings an opportunity to have lunch on a sandbar surrounded by nothing but crystal blue ocean. And each day ends with sundowners on the roof, listening to the deep beat of humpback whales striking their tail-fins against the surface of the water.

As gratifying as any of these, though, is the sense that a visit to Ibo is not a one-sided affair in which only the tourist benefits. As much as 50% of the island’s population is positively affected by the presence of Ibo Island Lodge. Now that’s responsible tourism.