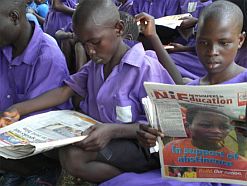 Uganda’s Vision Group is planning to overhaul the process of printing newspapers in the East African country following the acquisition of a high-capacity R65.6-million (US$9-million) printing press.

The group said in a report on 4 April that its new printing press will “boost efficiency and improve delivery times of its products onto the market”.

The “ultra-modern printing press” was assembled in a purpose-built R36.4-million ($5-million) factory in China and is already in use; its first task was printing the 2 April, 48-page edition of New Vision.

Vision Group, listed on the Uganda Stock Exchange, is owned by both the government and public, with the latter holding 47% of shares. It publishes New Vision, a leading newspaper with about 65% market share of total daily newspaper sales in Uganda. It also brings out four leading regional titles, including Bukedde and Orumuri. It boasts four magazine titles, including City Beat and Flair, and an online division.

The company held a staff party to celebrate the arrival of the new press. According to the April report, Robert Kabushenga, the group’s CEO, described it as a “milestone in Uganda’s media industry”.

Kabushenga said the press was a new design in East Africa. It’s also the third new printing press to be imported to Uganda in the history of the country.

The press will help Vision Group reach deadlines more efficiently, it said. It will also make it easier to include breaking news and advertisements that arrive late for print. “We can now wait for an advert until 10pm and still have it published,” said Kabushenga. “Advertisers can also send their pages directly to pre-press.”

During the party, held at its headquarters in the capital city, Kampala, Vision Group also celebrated the completion of a modern studio for Bukedde TV, which the company introduced in 2009. The studio was completed on 22 March, coinciding with the group’s 24th anniversary, reported New Vision.

Bukedde TV is an 80% entertainment station that broadcasts in Luganda, one of the most widely spoken languages in the country. Vision Group’s second television station, TV West, will start broadcasting in April. The group also launched five regional radio stations recently.

The launch of the radio stations has boosted newspaper sales, Kabushenga said, with a 100% increase in circulation.