According to the World Food Prize
Foundation, the implementation of the
Agricultural Extension Service led to
Ghana’s cocoa production doubling
between 2002 and 2005.
(Image: Flickr) 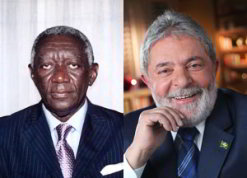 Past presidents of Ghana and Brazil,
John Agyekum Kufuor and Luiz Inácio
Lula da Silva, have been awarded the
2011 World Food Prize for alleviating
hunger and poverty in their respective
countries during their terms in office.
(Images: The World Food Prize)

Past presidents of Ghana and Brazil, John Agyekum Kufuor and Luiz Inácio Lula da Silva, have been awarded the 2011 World Food Prize for alleviating hunger and poverty in their respective countries during their terms in office.

The international accolade is awarded to individuals who have ensured human development by improving food quality, quantity and availability.

Kufuor and Da Silva have both been hailed for initiating and implementing political policies that helped address poverty and hunger in their countries through public- and private-sector interventions.

Kufuor has praised his government’s policies on agriculture for maximising food security in Ghana.

He said: “Whilst in government I knew that poverty and hunger went hand in hand and so my government tried very hard to lift our country out of that bracket. Especially in line with the Millennium Development Goals, the first item was to fight against hunger and poverty.

“We tried to improve agricultural production because over 60% of our people are rural and they live on agriculture. There is so much unemployment at home so we thought if we improved agriculture, modernised and commercialised it, we will be fighting against unemployment and poverty and along with it hunger, and I think we went some way.”

Kenneth Quinn, president of the World Food Prize Foundation, said: “President Kufuor and President Da Silva have set a powerful example for other political leaders in the world. Thanks to their personal commitment and visionary leadership, both Ghana and Brazil are on track to exceed the UN Millennium Development Goal 1, which is to cut in half extreme hunger before 2015.”

Da Silva will be honoured for the implementation of his Zero Hunger strategy during his tenure as president of Brazil.

He said: “I am really moved to know Brazil was chosen as a country that achieved good policies regarding agriculture and hunger. Brazil has a lot to show in the area of food security and we want to share our experience with other countries, especially with African countries and poor countries in Latin America, with both our technical knowledge and from the point of view of food productivity and distribution.”

Strategies applied by the two countries

The former president of Ghana initiated reforms including the Food and Agriculture Sector Development Policy, which heightened public investments in the agricultural and food sector.

The Agricultural Extension Service was brought back under Kufuor’s tenure as president, which educated producers on the best farming practices.

According to the World Food Prize Foundation, the implementation of the Agricultural Extension Service led to Ghana’s cocoa production doubling between 2002 and 2005, and food crops such as maize, cassava, yams and plantains increased significantly, as well as livestock production.

The Ghana School Feeding Programme ensures that one nutritious, locally produced meal is given to scholars each day.

These reforms led to the US Millennium Challenge Corporation giving Ghana an award of $547-million (R3.7-billion) in 2006.

Brazil’s Da Silva initiated reforms through his Zero Hunger strategy, which included subsidising families through cash aid so they could afford essential basics.

Child malnutrition was reduced through the School Feeding Programme, which provides nutritious meals to all children in Brazil’s public school system. By 2010 the programme was serving 47-million scholars.

According to the World Food Prize Foundation, child malnutrition fell 61.9% between 2003 and 2009 in Brazil, and all age groups experienced improved access to quality food.