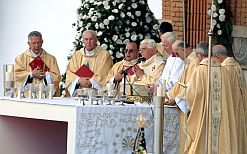 The pope celebrates mass during his
visit to Brazil in 2007. (Image: Wikimedia) 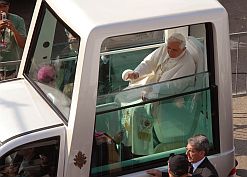 Pope Benedict in the specially-designed
popemobile, which provides security while
giving the faithful greater visibility of their
leader. (Image: Wikimedia) 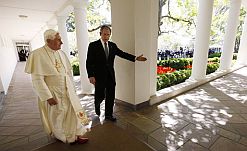 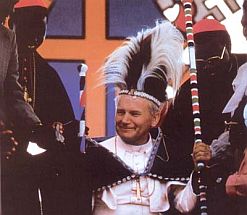 Pope John Paul II in traditional regalia
during an early visit to Africa.
(Image: Society of Christ for Polish abroad)

Pope Benedict XVI makes his maiden visit to Africa in mid-March. The pontiff sets foot on African soil for the first time on 17 March when he arrives in Cameroon, and later in the week he is set to visit Angola.

The Holy Father, who assumed the leadership of the Catholic Church in 2005, has a full schedule for the week of his African sojourn. During his three-day stay in Yaoundé, Cameroon, he will start off by meeting with Cameroonian president Paul Biya, followed by meetings with the bishops of Cameroon as well as representatives from the Muslim faith in that country.

During his meeting with Biya, who has been in office since 1982, Benedict is expected to press for strong measures to curb government corruption. Corruption has brought Cameroon to its knees and was declared the most corrupt nation on earth more than once by the German-based anti-corruption NGO, Transparency International.

The international watchdog releases an annual Corruption Perceptions Index which rates countries on a scale from one to 10 – the higher the score, the less corrupt the country. Out of 180 countries surveyed in 2008, South Africa is number 54 on the list with a current score of 4.9, and overall has managed to improve its rating in small increments in recent years. The country is the third least corrupt in Africa, coming in behind Botswana (36) and Cape Verde (47).

The German-born pope will also say a number of public and private masses and will brief Africa’s bishops on the topics for discussion at the upcoming Second Special Assembly for Africa of the Synod of Bishops, taking place at the Vatican in October 2009.

Benedict XVI flies to Luanda, Angola, on 20 March where once again he will meet with the president of his host country, in this case José Eduardo dos Santos, who has served as Angola’s leader since 1979. Another top-level gathering with authorities and members of the diplomatic corps will be followed by a meeting with the bishops of Angola and São Tomé.

The pope is expected to say a celebratory mass in honour of the 500th anniversary of the evangelisation of Angola, formerly a Portuguese colony. Angola became independent on 11 November 1975 but to a large degree the country has retained the religion of its former master, with about 56% of its Christians practising the Catholic faith.

Almost 40% of Cameroon’s population of 18-million is Christian, and of those, Catholics make up about 26% of the population overall. The faithful are concentrated in the francophone provinces of the southern and western regions of the country.

The Catholic Church remains strong in many other parts of Africa, with vocations on the increase, and Benedict’s visit is expected to bring many more into the fold. In Western countries faith appears to be dwindling, causing the Church much concern, but in Africa and Asia religious communities are thriving.

These days many parishes in Europe and North America are tended by an African priest. Missionary activity is also on the rise, according to the Vatican’s own newspaper L’Osservatore Romano.

In both countries the pope will mingle with communities, the youth and women’s groups. Since assuming the mantle of pontiff in 2005, 81-year-old Benedict has travelled widely through Europe, and has also visited Brazil (2007), and the US and Australia (both 2008).

His predecessor, Pope John Paul II, travelled extensively through Africa, visiting the continent many times. John Paul visited Côte d’Ivoire and Kenya three times each, and Benin, Burkina Faso, Cameroon, the Democratic Republic of Congo and Nigeria twice each. He made a single visit to a further 34 African countries, including Angola, Egypt, Morocco, Kenya, Ghana, Uganda, Malawi, Mauritius and South Africa. At the time of his death the globe-trotting pontiff had made more foreign visits than any other pope.