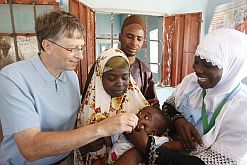 Bill Gates during a visit to Nigeria. 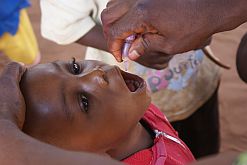 Cases of polio have been drastically reduced
in the world. (Images: Polio Eradication)

Gates visited Africa’s most-populous country in June 2010 as part of his ongoing commitment to improve healthcare standards across the world.

After spending time with affected Nigerian communities and speaking to healthcare leaders there, he noted how the country has drastically reduced polio infections.

During his trip he visited Kano state in northern Nigeria, which has recorded high infection rates over the years and still remains vulnerable to the virus.

“I was very excited to visit northern Nigeria in June, because the progress there since my last visit in February 2009 has been especially impressive,” Gates wrote in his blog published on 26 July.

Just five polio cases had been reported in Nigeria by 14 July this year, compared to hundreds recorded in 2009, Gates said.

Through the Bill and Melinda Gates Foundation, the US business magnate and philanthropist provides much-needed funding to fight polio outbreaks across the world.

A campaign to immunise more than 6-million children under the age of five had just begun in Nigeria when Gates arrived.

Some residents are wary of the free vaccine, Gates said, but community leaders are always on hand to explain its necessity.

“Because the polio vaccine is free and brought to people in their homes, some people think there must be something wrong with it.

“Community leaders play a critically important role in helping to overcome mistrust, and a big focus of anti-polio efforts is on informing these leaders and enlisting their support,” Gates said.

It was in Abuja, Nigeria’s capital, where Gates picked up on the innovative ways used to promote immunisation. “Pro-immunisation messages are being embedded in the plotlines of popular TV entertainment programmes, for example,” while “one of Nigeria’s largest mobile phone service providers has agreed to send out about 25-million free text messages on polio and health,” he said.

Gates has been working with Nigerian government officials, including new President Goodluck Jonathan, Minister of Health Onyebuchi Chukwu and several state governors, whom he met during the recent trip.

“Commitment from Nigeria’s leaders has been crucial in advancing the nation’s fight against polio,” said Gates. “I was very impressed with Nigeria’s progress against polio. I tried to encourage everyone to not let up.”

The country’s northern states experienced a particularly devastating polio outbreak in 2009, with about 258 type 3 and 103 type 2 cases recorded in July that year, according to the World Health Organisation (WHO). This accounted for 24% of cases globally, but 2010’s figures are far more encouraging.

Nigeria also had highest number of polio cases anywhere in the world in 2008, estimated at 798. The outbreak also affected neighbouring countries and spread as far as Angola, Kenya and Mauritania.

According to statistics provided by the Global Polio Eradication Initiative, Nigeria is among the countries that have recorded fewer cases this year. Tajikistan remains the nation with the highest number of reported cases: by 12 June 2010, there were 425.

Senegal has seen 18 cases, making it the country with the highest record in West Africa in 2010. Liberia, Mauritania, Mali, Niger and Sierra Leone have also recorded isolated cases.

A “mop-up” immunisation campaign is scheduled for Mali on 30 July. The Global Polio Eradication Initiative said it will be spread “across high-risk districts of Mali and Mauritania, with a special focus on targeting nomadic populations”.

Getting rid of polio for good

Globally, polio cases have been reduced by 99% in the past two decades, but funding initiatives that target outbreaks needs to be strengthened, Gates said.

The world is, however, is on the right path “because of some great efforts, particularly by the Global Polio Eradication Initiative”, he added.

The initiative involves the WHO, Rotary International, the US Centres for Disease Control and Prevention and the UN Children’s Fund.

The Bill and Melinda Gates Foundation has set aside US$10-billion (about R73-billion) over the next decade for the development and distribution of vaccines in the world’s poorest countries. “We’re also supporting work to improve polio surveillance,” said Gates.