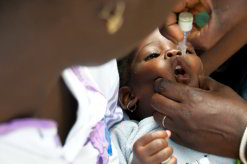 The Angolan government is preparing to renew efforts to eradicate polio with support from global partners, including the Bill and Melinda Gates Foundation, which has made polio eradication its top priority.

Angola succeeded in stamping out polio for three consecutive years at the beginning of the century, but a strain of the virus prevalent in India reappeared in 2005 and has since spread to the neighbouring countries of Namibia, the Democratic Republic of Congo and the Republic of Congo.

In 2010, 32 people in Angola contracted the highly infectious, non-curable disease, which can cause total paralysis in hours.

“Polio eradication is a global goal; if we fail in one country, then the whole programme fails,” Jos Vandalaer, head of Unicef’s global immunisation effort, told Irin by telephone from Luanda.

Angola’s health system, still recovering from years of war, only managed to fully vaccinate 35% of infants in 2009.

According to Unicef, supplementary immunisation campaigns have been beset by a lack of manpower, technical capacity and planning, particularly in Luanda where most of the polio cases in recent years have been concentrated.

Since the war, Luanda’s population has boomed, and many of the rural migrants live in cramped conditions with little access to safe water and sanitation. Such conditions are ideal for the spread of polio, which is transmitted through faecal-oral contact.

Tim Peterson of the Gates Foundation, which has donated more than US$1-billion (R7.1-billion) globally to polio eradication and pledged funds for Angola’s national campaign, pointed out that the effort to rid the world of polio were “on the verge of success. There’s been a more than 99% reduction in cases since 1988,” he told Irin. “This is the final push and you don’t stop running a race a few hundred yards from the end.”

Peterson added that investing in polio surveillance and immunisation programmes was a stepping stone towards the delivery of more vaccines and firmer action against other vaccine-preventable diseases.

The Gates Foundation and other partners have agreed to support the Angolan government to improve its delivery of vaccination programmes, but Vandalaer said the success of the country’s polio campaign would depend on the leadership behind it.

“It’s only the government that can provide this programme,” he said. “We’re just here to help fill the gaps.”